This is Part Two of my Oakland neighborhood series for those of you out there who might want to live in San Francisco but are pretty sure you can’t possibly in a million years afford it. “I’ve heard people just move to Oakland across the bridge and it’s just like Brooklyn.” Yes and no… Last time I explored Rockridge here which is the best of the urban Oakland neighborhoods, but it comes with a pretty high price tag. Now I’ll describe the Emeryville area which has its moments and comes in at a significantly lower price point. That’s not to say it’s cheap, but it’s cheaper. Sometimes the difference between living in a place and not living in a place comes down to the er. So here you go for what it’s worth. First of all, Emeryville is a diminutive separate municipality that boarders Oakland and Berkeley, but for the purposes of this blog post I’m describing the entire area centered around San Pablo Avenue (see photos above) in Oakland that happens to include Emeryville. There are some differences between the two towns, but you can’t tell where one ends and the other begins. Many of the usual points of differentiation like the quality of the public schools in one place vs. another are pretty much moot here since it’s all uniformly mediocre. If you have school aged kids you’re going to move someplace else entirely. But for singles, childless couples, and folks with toddlers it works really well. And you have ready access to lots of tech jobs that keep popping up since San Francisco is crazy expensive and a lot of start ups hate the idea of setting up shop in suburbia. So that’s Emeryville (ish). Want one of these lovely fixer-upper bungalows on the Oakland side of the boarder? They tend to sell for about $500,000 these days. Keep in mind, you aren’t paying for the house or the spoonful of dirt it sits on. You’re paying for ready access to good paying jobs and culture. Want the same exact thing for $150,000? That’s called Fresno. The great thing about living in this part of Oakland is the NIMBY folks are no where to be seen. If you want to set up a permaculture demonstration site on the curb of your steel shed no one’s really going to mind. I actually like that about Oakland. Your neighbors might not be tidy, but they’ll cut you all kinds of slack if you want bright orange curtains and a purple front porch. 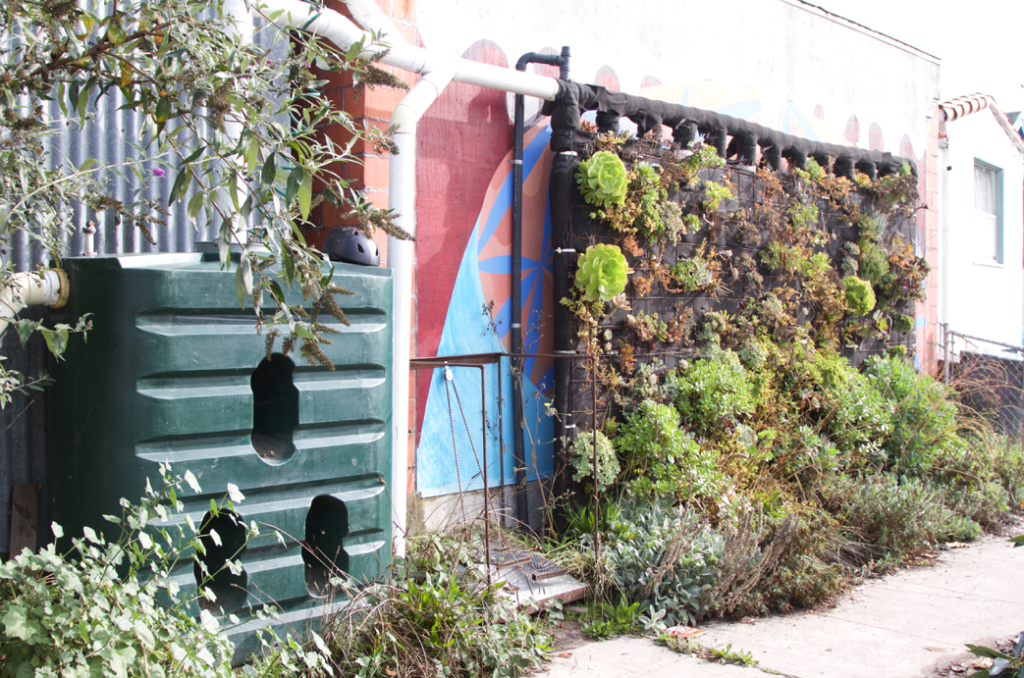 But here’s the deal. No one on the Emeryville side lives in a single family home. Emeryville is a former factory town and the whole point of the place for most of the Twentieth Century was to run industrial operations without the unpleasant influences of a voting population gumming up the works. It’s been reinvented in recent years as a warehouse live/work loft kinda spot that’s now mutating into condo complexes with vaguely Rust Belt motifs to compliment the granite kitchen counters. Evidently the best way to sell bland boxy real estate is to slap up some corrugated tin segments here and there for local color – and quality shrubbery of course. Tech companies mix comfortably with “makers”, artsy types, and an Ikea. There’s no rhyme or reason to anything as you wander around town so whatever quirky building type you like it’s probably available. 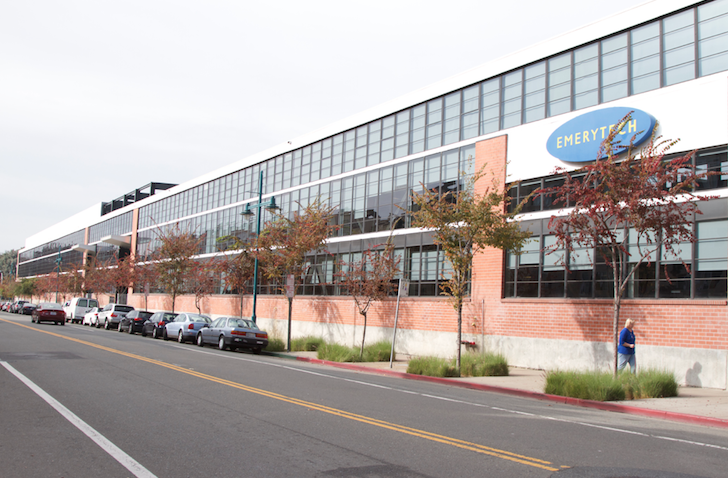 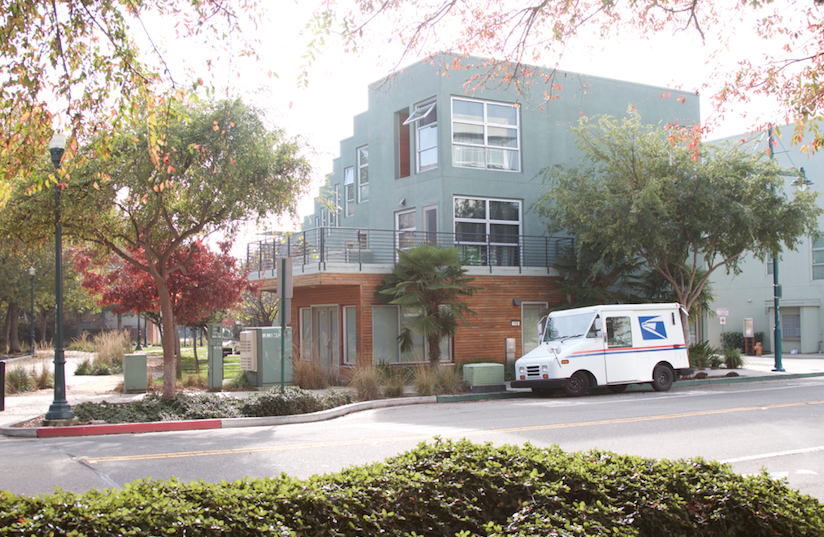 Now one thing I must point out is that there is no BART station in either Emeryville or this particular part of Oakland. BART (for those of you not familiar) is the commuter rail system that carries people around the Bay Area and connects San Francisco with Oakland and many of the outlaying suburbs. Being within a reasonable walk to BART does wonderful things to a neighborhood, but alas, not around here – hence the somewhat lower property values. Emeryville does have a hokey shuttle bus service called the Emery-Go-Round that will collect you from one of the not-too-distant BART stations elsewhere and delivery you to the Home Depot and Target, but it’s not quite the same. What Emeryville does have is an Amtrak station… but there’s a caveat. I’m a huge fan of train travel and have taken the TGV in France, the Shin Kan Sen in Japan, the CRH in China, and the EuroStar in the U.K. Jeeeeez how I wish we had service like that in the States. But instead we have Amtrak. The trains from here to Sacramento or LA or Seattle run so erratically and the tickets are so ill-priced relative to other transportation options that it’s a complete waste. Mostly Amtrak announces that the train you booked has encountered some mysterious difficulty and passengers are placed on buses instead – except Megabus would be better and cheaper. It makes more sense to think of the Emeryville Amtrak station as a bus stop with rails out back. I’m just sayin’. To quote James Howard Kunstler, “The Bulgarians would be ashamed.” I got up on the top floor of the Ikea parking deck to get a good view of town. It’s a complete hodgepodge but somehow, for the right kind of person, it actually works. Mostly. So there you have it. 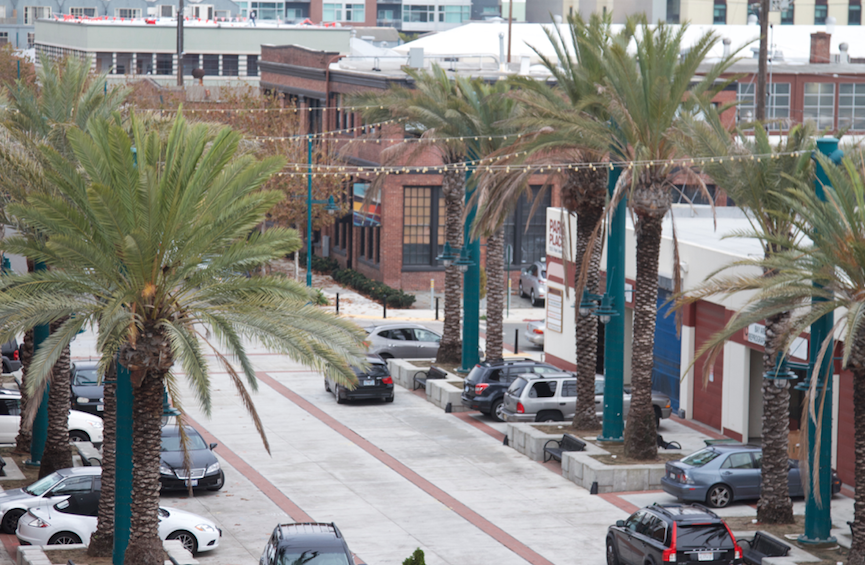