.
Municipal governments all have land use policies that attempt to achieve particular goals: economic development, ease of traffic flow, maintaining open space, segregating noxious industries, and so on. So local authorities break out the colored pencils and create big blocks on the map. We all know what this looks like on the ground.
. 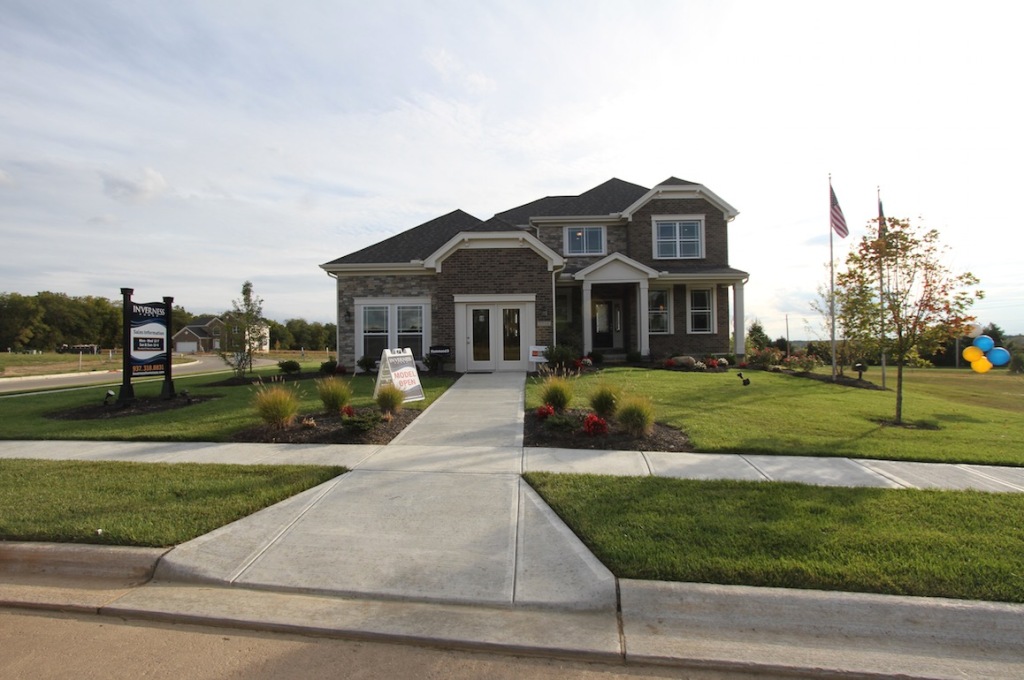 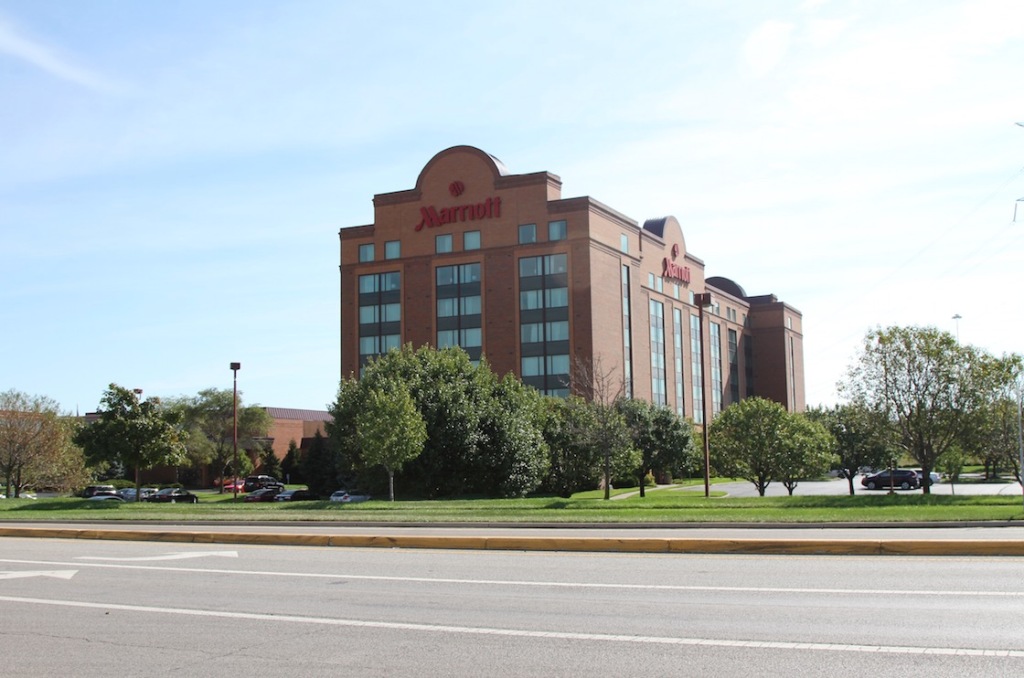 Restaurants go here. And so on…
.

And in order to connect all those separate pods the local authorities need to build and maintain an infinite amount of very expensive attenuated public infrastructure like this.
.

This is Ohio, but it could be anyplace. This has been the default land use pattern all over North America since the late 1940’s. Everything in this suburban landscape was built on a large scale by regional or national corporate developers who are really good at delivering “product.” It’s easy to administer and finance because every last detail is standardized from coast to coast. 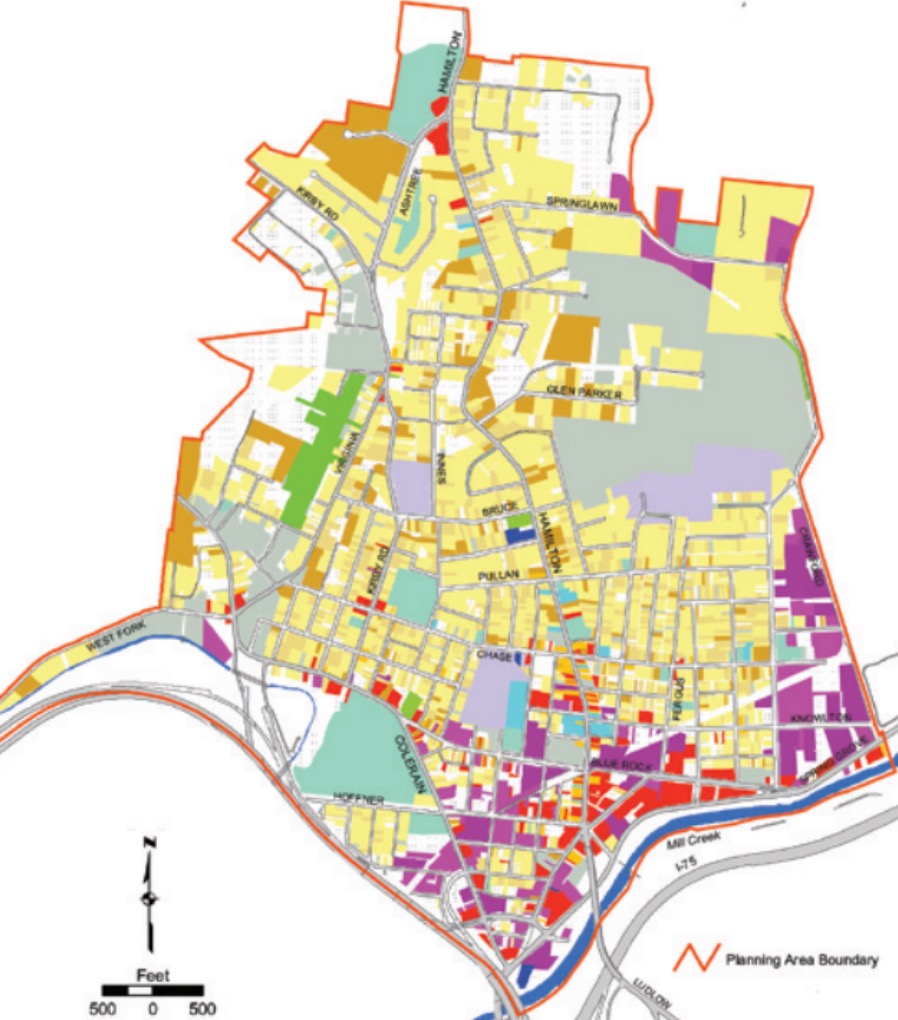 CAGIS
.
Now let’s look at an example of a neighborhood that existed before modern zoning was implemented. Above is a map depicting the land use pattern in the Northside neighborhood of Cincinnati.
. 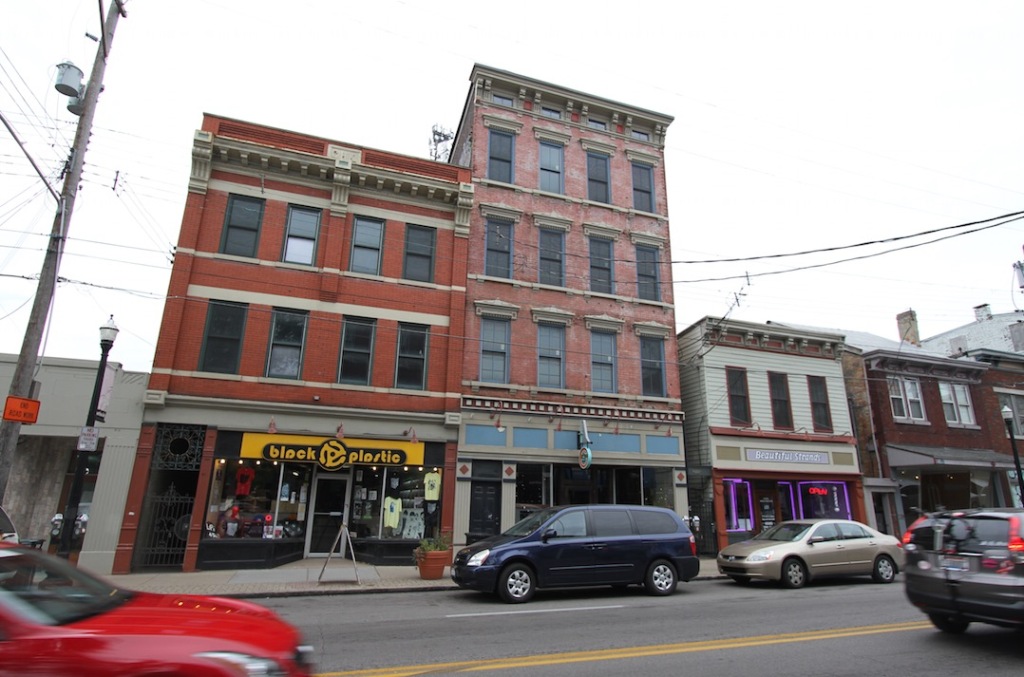 Northside grew organically along a streetcar line that connected the neighborhood to nearby downtown. Land was carved up into small lots and sold off to individual buyers who then built whatever made sense to them at the time. In an era of up front cash construction people only built exactly what they could afford. Whatever they built had to be profitable and/or functional from the very beginning on a tight budget. Over time small buildings were replaced by larger ones on the same footprint.
. 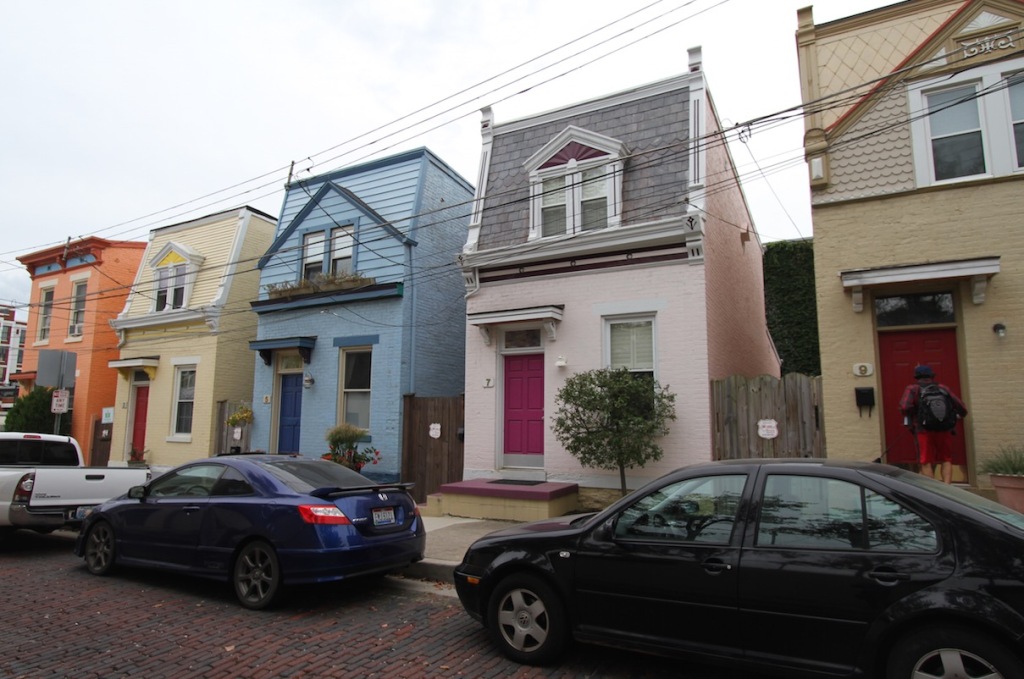 Some lots were platted at 6,000 square feet. Some lots were 4,000. Some were 2,000. Others were even smaller. Many of these homes were mother/daughter duplexes and some had back yard cottages.
.

.
Throughout the neighborhood, in no particular order that would appeal to a city planner, there were small apartment buildings, shops, cafes, offices, and industrial buildings all mixed together. The historic pattern is chaotic, but smart and extremely productive and cost effective. There’s a huge amount of high value private activity on a slender bit of very affordable public infrastructure.
. 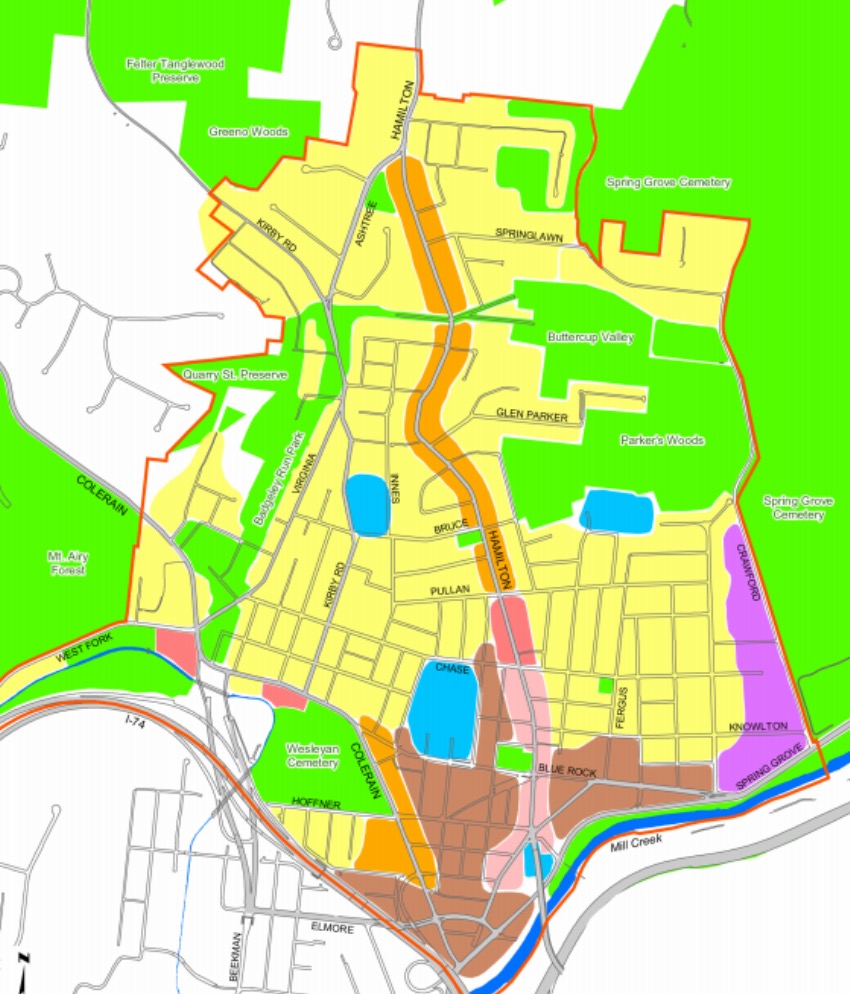 CAGIS
.
But at a certain point the city of Cincinnati decided that Northside needed to conform to the modern land use pattern. Out came the colored pencils to tidy things up. Single family homes here, shops there, highway improvement projects here…
.

But the consequences of this kind of zoning distort the neighborhood in peculiar ways. This building from the 1890’s was clearly designed as a corner shop with an apartment or two upstairs. There are a lot of professional people who would be willing to pay a premium to live and work in the same building – as either owners or renters. But that’s now illegal. The property was recently renovated to a high standard, but it was not permitted to be used for anything other than a single family home.
. 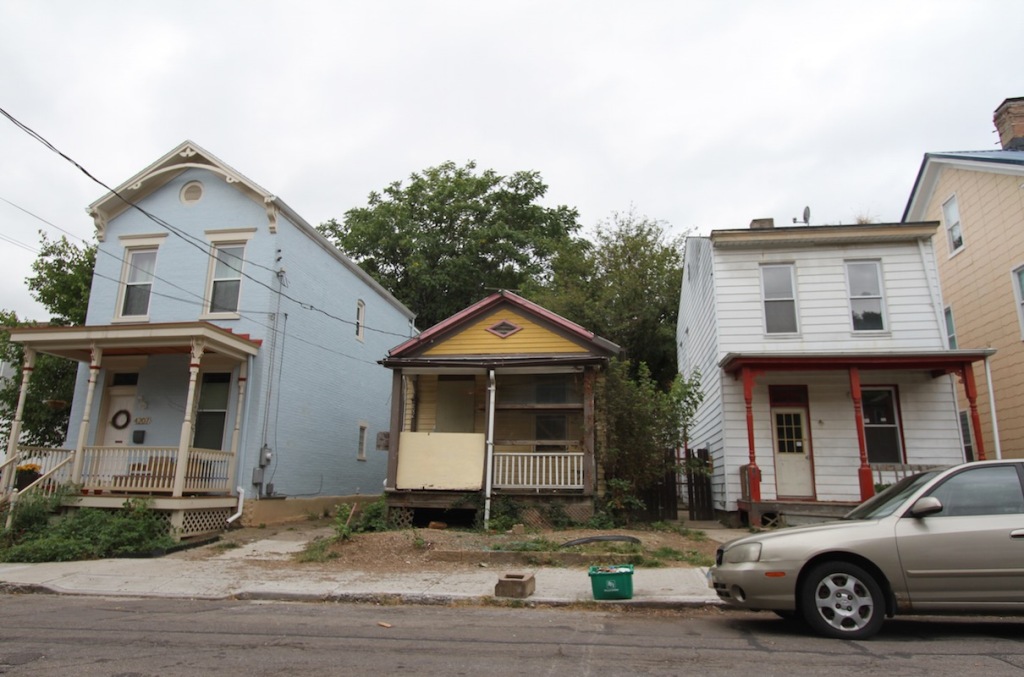 Next door and down the block are plenty of small older homes that are too far gone to be renovated. The cost of bringing these places back to life far exceeds their ultimate market value. The sensible thing to do would be to tear them down and replace them with new two or three story homes. But that’s now illegal. According to modern zoning regulations all new homes must be built on a lot of a certain minimum size. These lots are too small. So they sit rotting.
. 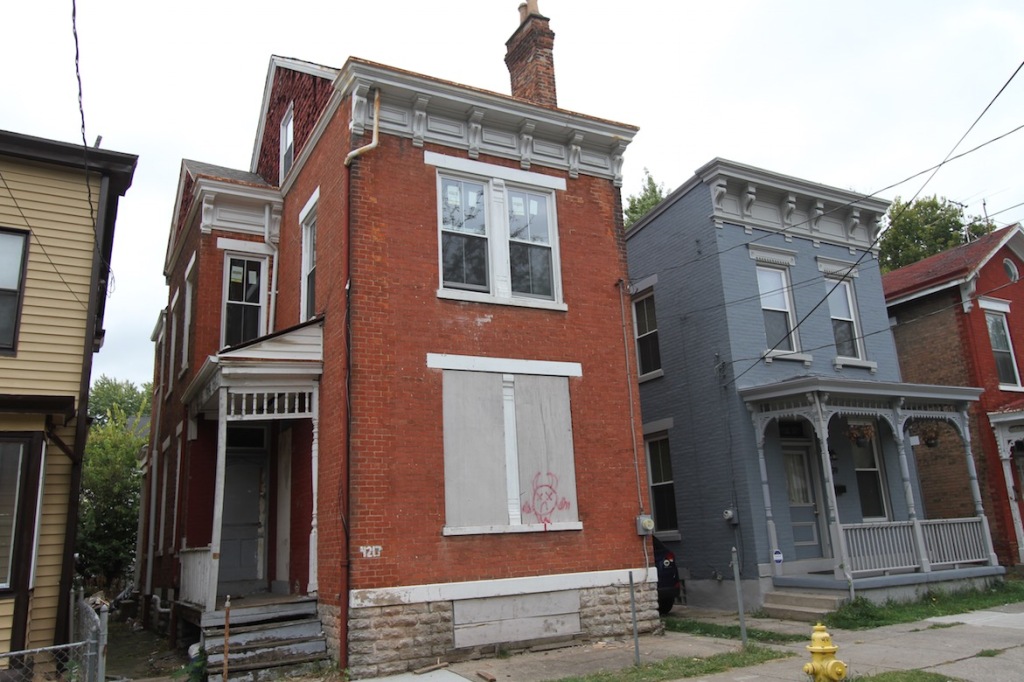 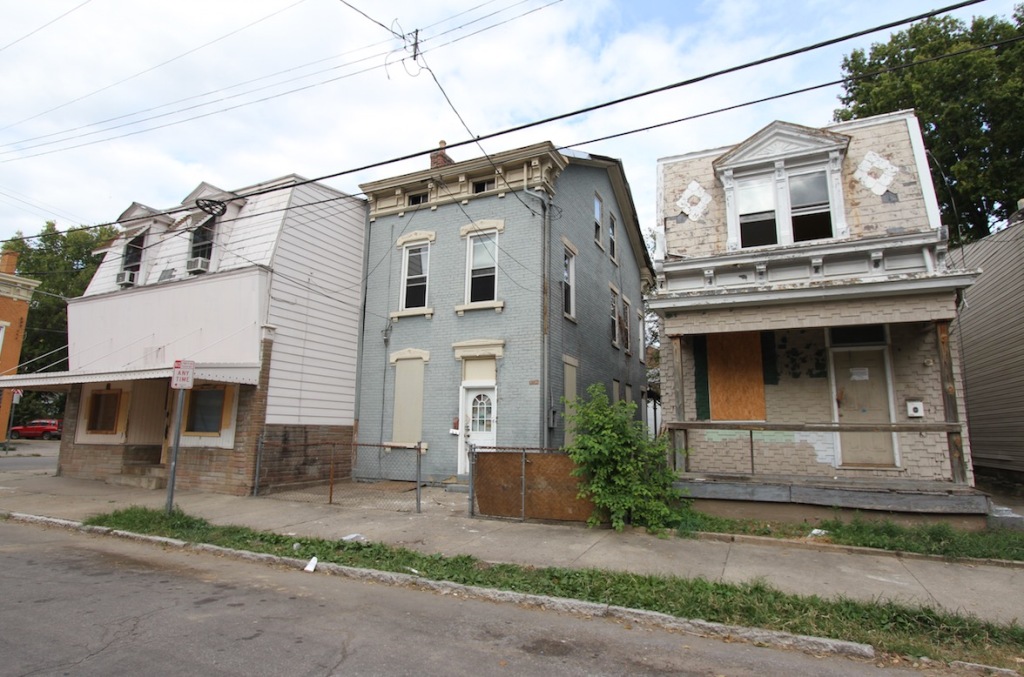 I want to be fair to the people who created these regulations. The goal was to clean up a neighborhood that had fallen into disrepair. Northside become blighted after decades of middle class (white) flight to the suburbs. Those suburbs were clean and prosperous. So it seemed reasonable for the city to impose a suburban code on Northside to mimic the cul-de-sacs and office parks. But restrictive zoning doesn’t create prosperity. Nor does it prevent poverty. It’s a classic example of correlation being confused with causation.
. 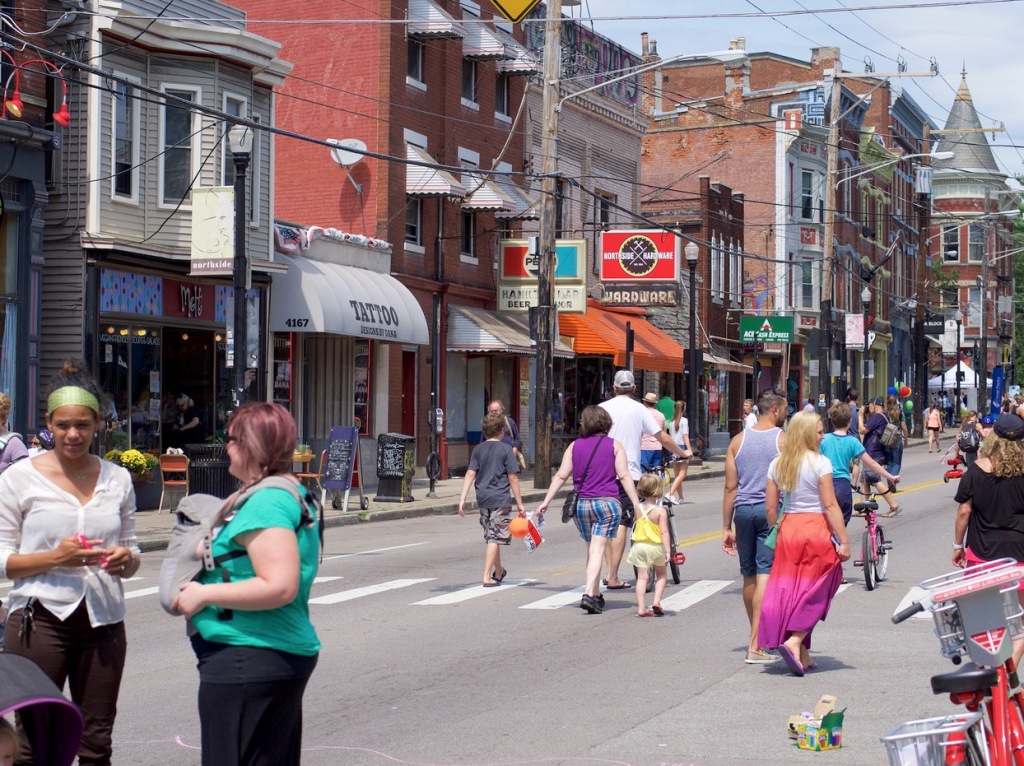 Travis Estell UrbanCincy
.
Northside is in the process of coming back to life after decades of decline because it’s more urban, because it has great compact historic housing stock, because it has a vibrant mix of uses, because it has quirky rental options imbedded throughout the community, because there’s a mix of black and white residents of all economic levels… And just for the record, many aging middlebrow suburbs in the region are beginning to fail in spite of the fact that they conform to every last rule in the zoning and code books.

16 thoughts on “Orderly, But Dumb”