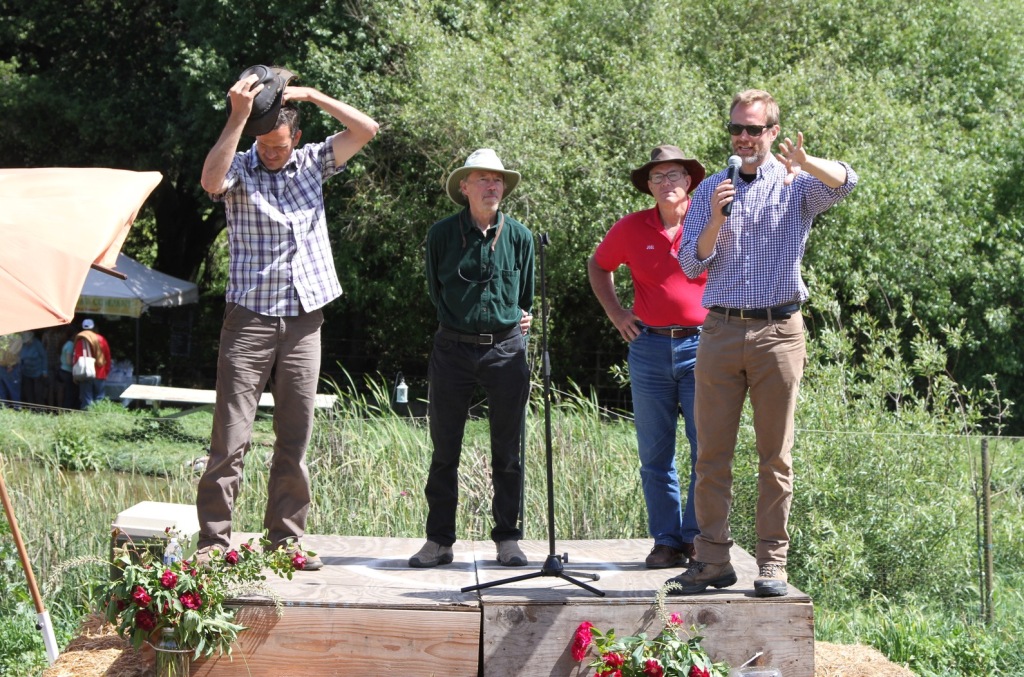 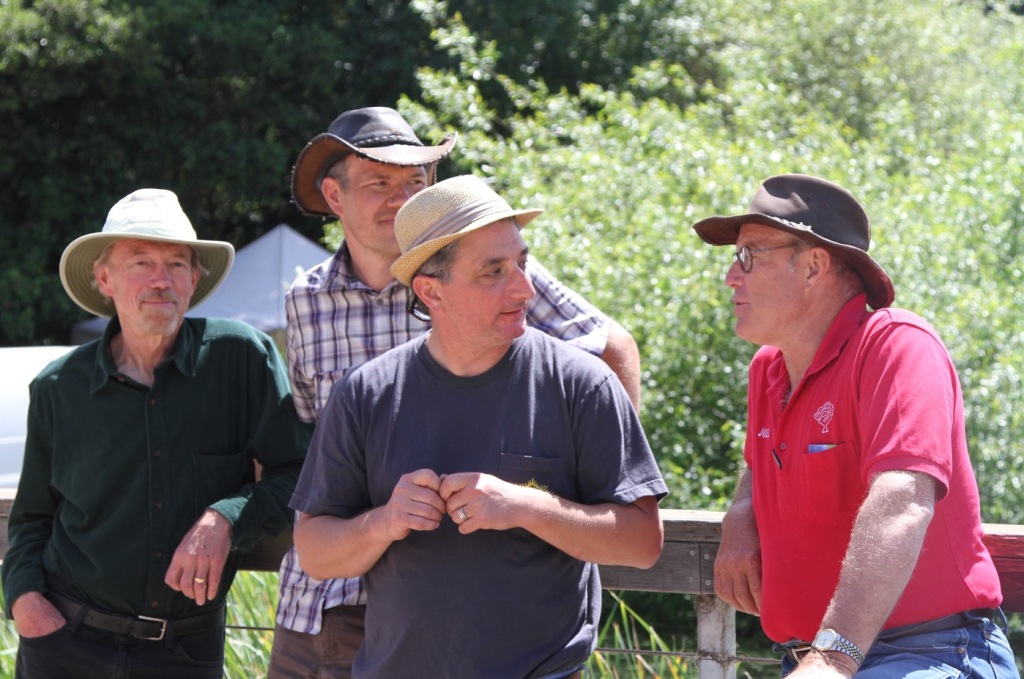 I attended a talk and tour this weekend at Tara Firma Farms. It was organized in part by Adam Taggart of Peak Prosperity. Speakers included Joel Salatin, Toby Hemenway, and Paul Kaiser among others. The general topic of conversation was how to work around industrial agriculture and get back to small diversified profitable local family farms. 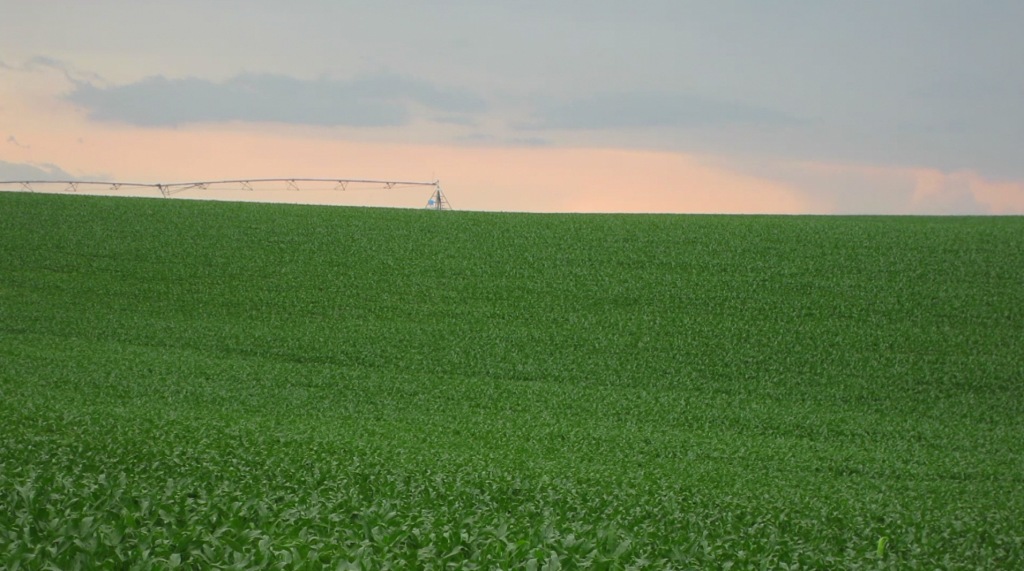 Regulations, government subsidies, and relentless economic pressure strongly favor big consolidated farms. The message is clear.  Produce just one thing. Produce a large quantity of it. And produce it as cheaply as possible. Use lots of big infrastructure, large machines, diesel fuel, synthetic fertilizer, pesticides, and herbicides. But use as little human labor as possible – and make sure the labor you do use is temporary and low wage. It helps if these operations are far from population centers where costs are low and there are fewer neighbors to push back against the “externalities.” 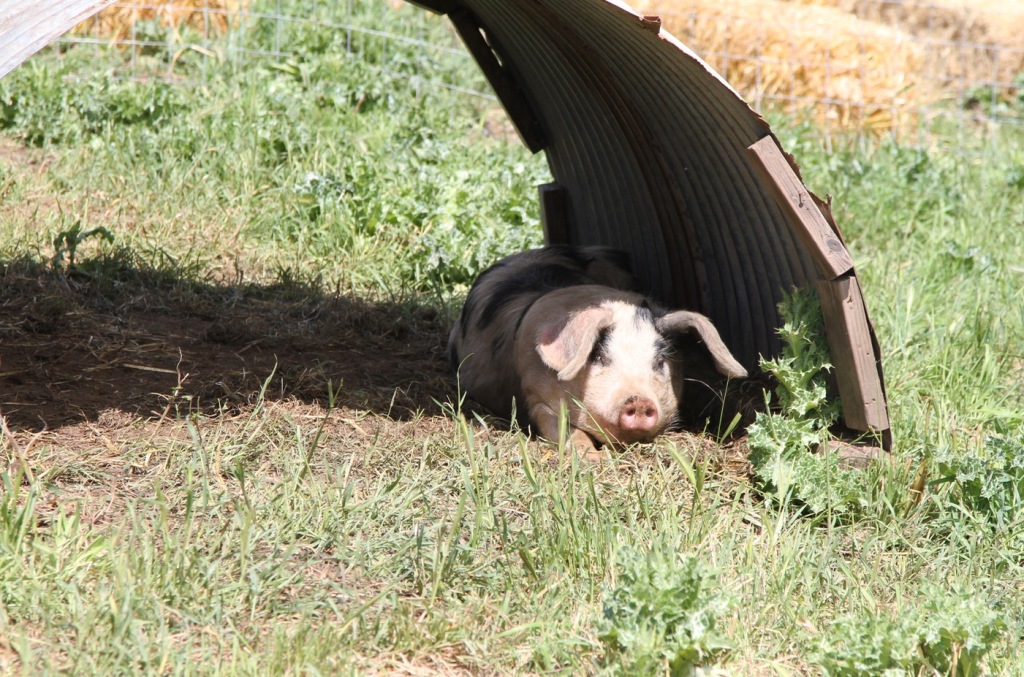 Anything that’s small, fine grained, or incremental is heavily penalized or is outright illegal. Try to butcher a hog or process broiler chickens in anything less than a million dollar federally inspected facility and see how far you get. Try keeping your family alive by selling your small batch produce to a supermarket chain or big box store and see how that goes.

Each of the speakers described various work-arounds for how to farm profitably on a smaller scale. First, eliminate as much capital equipment as possible. Skip the massive buildings and concrete and steel infrastructure. Skip the tractors, combines, and fuel. Skip the chemicals. And skip the banks. All they do is get a farm into debt. 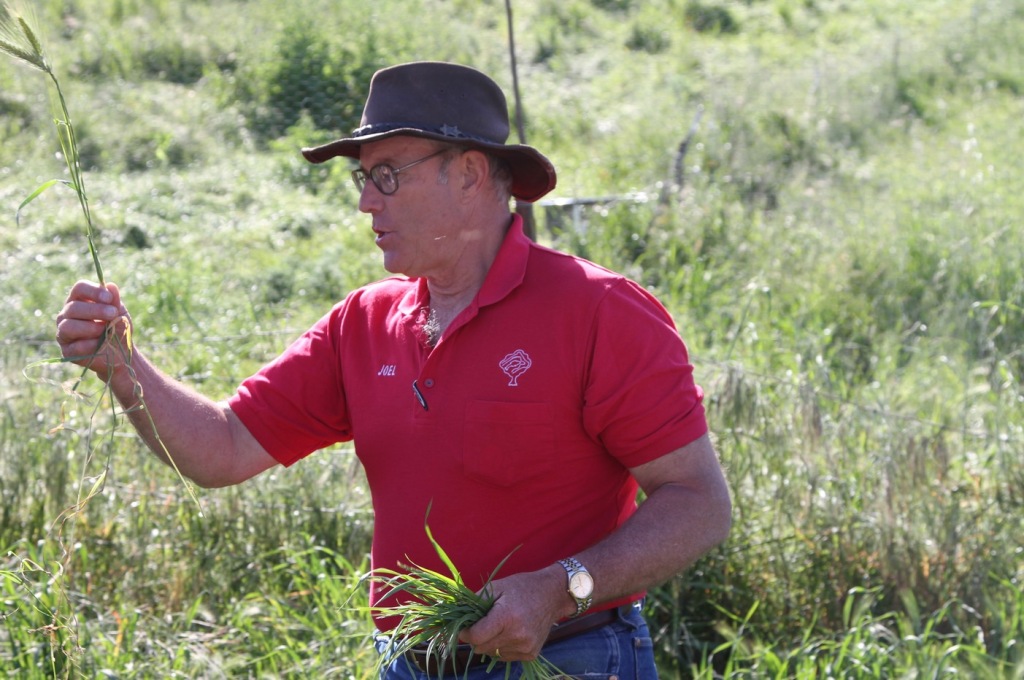 Here are two aerial views of Joel Salatin’s farm in Virginia. The white squares are mobile open air enclosures full of chickens that eat grass, bugs, and worms with only a small amount of supplemental feed. Each day they’re moved a few feet forward. The chickens cut the grass, control pests, and fertilize the soil with minimal store-bought supplies. The chickens are happier, healthier, and produce higher quality meat than factory farms. They’re then sold directly at a premium to local families and restaurants so there are no middlemen to soak up profits or dictate terms. No bank loans are required.

In contrast, here’s a neighboring farm with a typical industrial operation. The building is huge and contains large numbers of animals packed tight in cages and pens. Grain laced with antibiotics must be purchased to feed the animals. Concentrated waste must be removed and disposed of. And the meat, eggs, and milk that come out of such facilities are sold at a low price determined by distant centralized processors and distributors. 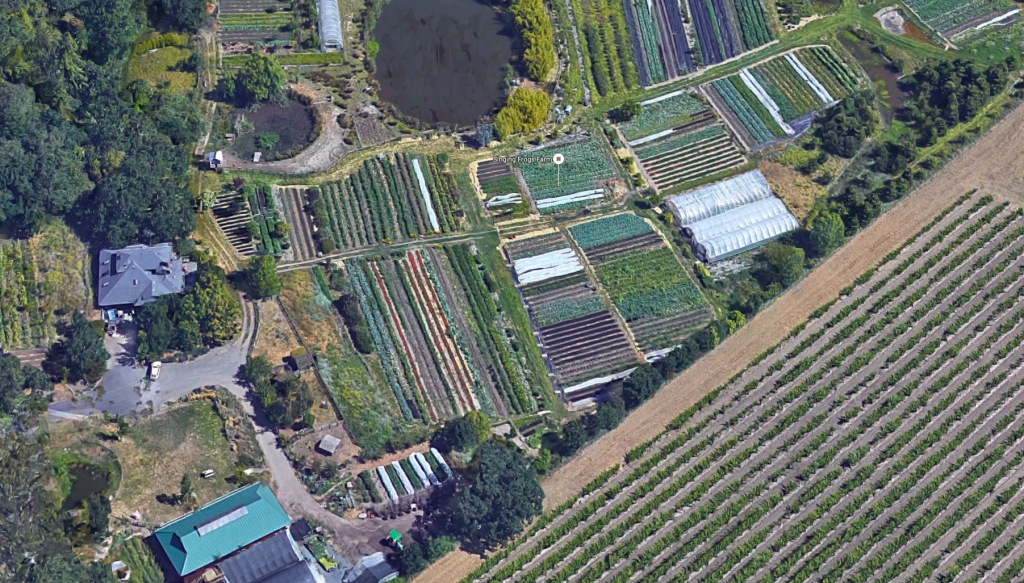 This is Paul Kaiser’s farm in California. He grows organic vegetables on less than three acres. He doesn’t till the soil. He doesn’t use chemical inputs. He has no machinery. And his farm yields $100,000 per acre per year. The state average for conventional vegetable production is $1,900 per acre. His neighbors grow high value wine grapes, but only earn $11,000 per acre. Paul maintains year round full time employees that he pays a living wage. Like Joel Salatin he only sells directly to local customers rather than through middlemen. His farm has opted out of the mainstream farm economy in order to thrive in a parallel system.

Toby Hemenway is a well respected Permaculturalist. Permaculture is a design system that mimics nature in order to produce more food per acre without the need for mechanical or chemical inputs. The plants and animals build fertility and pest resistance through natural relationships that strengthen over time. Toby left the big city, lived for a decade on a remote farmstead in the country, then realized the sweet spot was actually a smaller plot of land closer to the city in a semi-suburban area. Living in community is more productive, profitable, cost efficient, and satisfying than living alone in the woods.

Industrial agriculture will be with us for a very long time. But increasingly the system will be stressed. Having models for alternative small scale widely distributed and varied methods that function well with radically less financial, mechanical, and chemical dependancies is a good societal Plan B. These farms are antifragile. They gain from chaos. The industrial model will simply crash if any little part of the system breaks down. 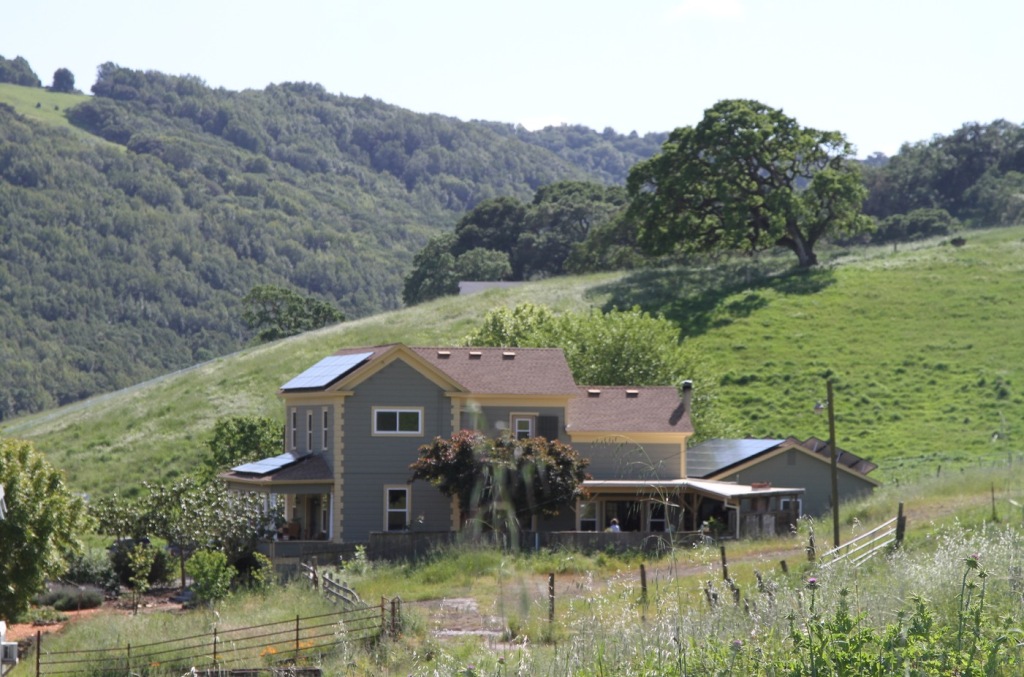 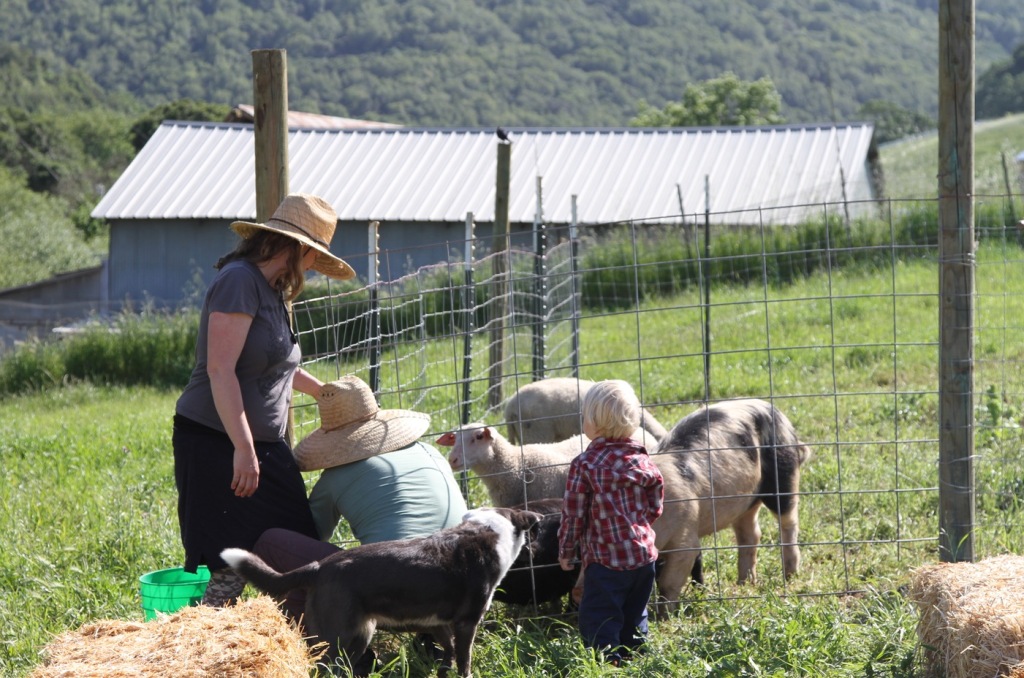 You have a choice. You can buy your food directly from people and farms like this. Or you can favor the kind of food that comes in plastic wrap from the big box store. A lot of this is up to you and how you spend your money.