I was talking to friends with small children recently and was surprised to hear they had opted to not vaccinate their kids. As is so often the case I’m profoundly ambivalent about these issues in terms of right or wrong. What really interests me is the larger dynamic behind why some things become cultural and political trends at specific times. Here’s my theory about the anti-vaccination movement.

When I was still in elementary school back in the early 1970s my family would occasionally visit my Great Uncle Tony and Aunt Hilda – one of my grandmother’s younger brothers and his wife. They had a big happy family with five children and a dozen cousins were always around. I always enjoyed being with them. There was a wall covered in framed family photos and I was intimate with nearly everyone on display. But there was one picture of a pretty young girl that I didn’t recognize. I asked my mom who she was. Her voice lowered. “That’s Sarah,” she said. “Who’s Sarah?” I asked. My mom’s voice lowered a bit more. “She was Uncle Tony and Aunt Hilda’s daughter.” I asked where she was now. Long pause. “Sarah died a long time ago.” I had never heard of anyone so young dying before and was alarmed because in the photo she looked to be about my age. I later learned Sarah died of polio in the early 1950s just a few years before the Salk vaccine became available.

The generation that experienced the death – or more commonly the withered limbs and diminished vigor – of infected children grabbed hold of the Salk vaccine with both hands. Quarantines, long hospital stays, and the use of iron lungs to manage the effects of the disease were highly visible. No less a figure than President Franklin Roosevelt had been tormented by the disease in the years preceding the vaccine. 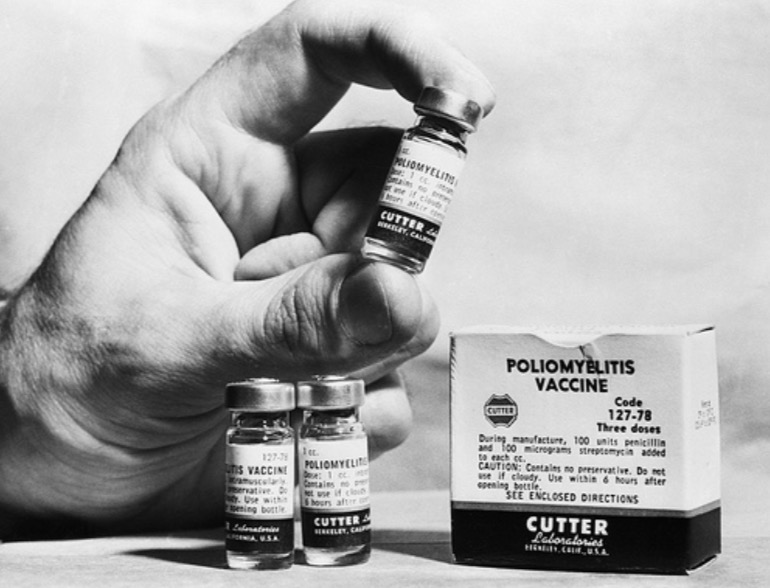 There were fits and starts in the beginning as some batches of the vaccine were improperly manufactured and actually infected some children causing a national scandal. So there were, in fact, very real risks associated with the vaccine in its early incarnations. But overall, the immediate fear of the disease itself overwhelmed the potential dangers. Preventive measures such as Dr. Salk’s vaccine were widely embraced as a miracle of modern science.

Even at the height of the Cold War bitter international enemies cooperated to spread the vaccine throughout the world on the logic that no one was truly safe from infection unless the disease was eradicated everywhere. Today only a few small pockets of polio persist in remote corners of Afghanistan and Pakistan. In those regions centuries old fears of invading armies and unscrupulous foreigners (Greeks, Persians, Indians, British, Soviets, Saudis, Americans…) are actually greater than the fear of disease. Today almost no child dies of an infectious disease in the moderately prosperous parts of the world. The diseases that do afflict the population in poorer regions are typically from lack of clean water and proper sanitation. There are tragic cases of non-infectious illnesses such as cancer to be sure, but those aren’t contracted casually the way polio, smallpox, rubella, mumps, measles, and such once were. In a part of the world where almost no one ever sees a child fall victim to these distant illnesses the fear has migrated to the more proximate concern (real or exaggerated) of side effects. Oddly, the multi-decade success of global vaccination programs created the conditions that bred apathy for their effectiveness.

The slow pendulum of biology and generational succession will eventually swing back. New threats will emerge and the fear of imminent devastating illness will focus attention on preventive measures. Vague concerns about possible imperfections in any cure will likely be pushed aside. The world is currently a hair’s breadth away from new antibiotic resistant bacterial infections and novel viruses. Fun!

I’d like to use this same framework to explain our present global economic and political situation. We had a bad spell of spectacular systemic failures in the 1930s and 1940s. These institutional crashes demonstrated what could go wrong – how very very wrong – if people didn’t cooperate and reach reasonable compromises and remedies. A whole generation was sacrificed solving those problems via war and immiserating loss. Once the dust settled new institutions were created organized around the principles of restraint  and cooperation. When cooperation wasn’t fully navigable all sides quietly agreed on an uneasy detente. Another direct full blown war was in no one’s interest.

But now new generations have been born and come to positions of authority with no living memory of the great convulsive crises of seventy and eighty years ago. All the safeguards have been dismantled and tossed aside as historical baggage. “It’s different now.” “It’s different here.” Our leaders as well as our disgruntled populations everywhere are looking for a fight. They’re the economic and political anti-vaxxers. What could go wrong?

49 thoughts on “The Anti-Vaxxer World”