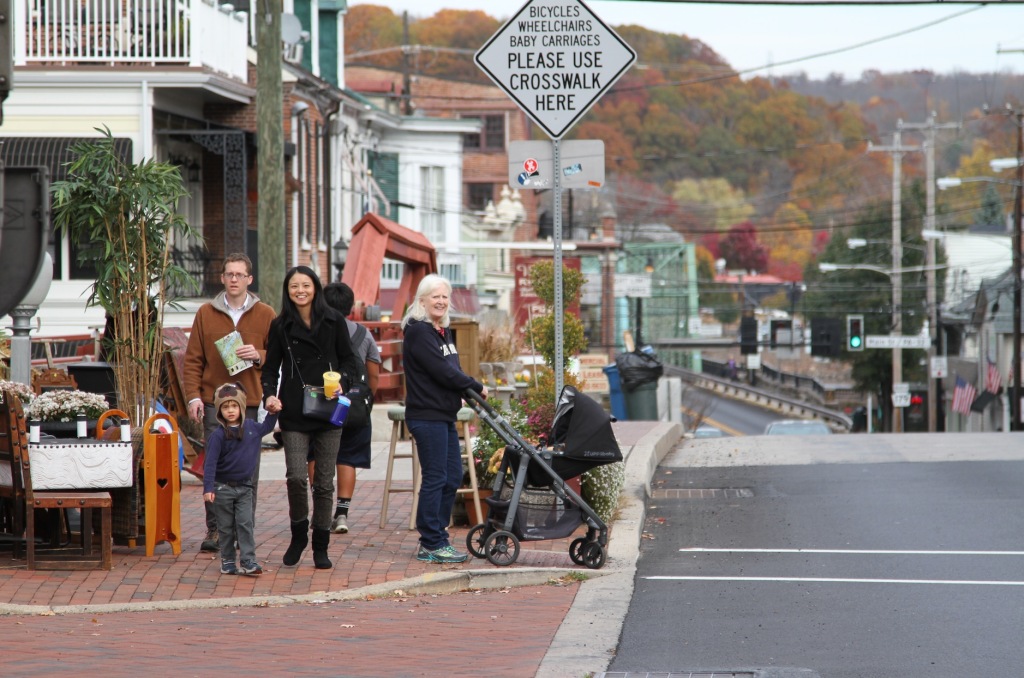 I’ve been asked to give another presentation for the Incremental Development Alliance and I’m working out the kinks of my talk here. IncDev is attempting to revive the traditional pre World War II development pattern of small scale, fine grained, walkable, mixed use, mom and pop neighborhoods that grow and change gradually over time from the bottom up. They provide training to individuals on how to navigate the existing set of institutional procedures. They also work with local communities to cultivate structural reform to make this kind of construction and activity possible again. 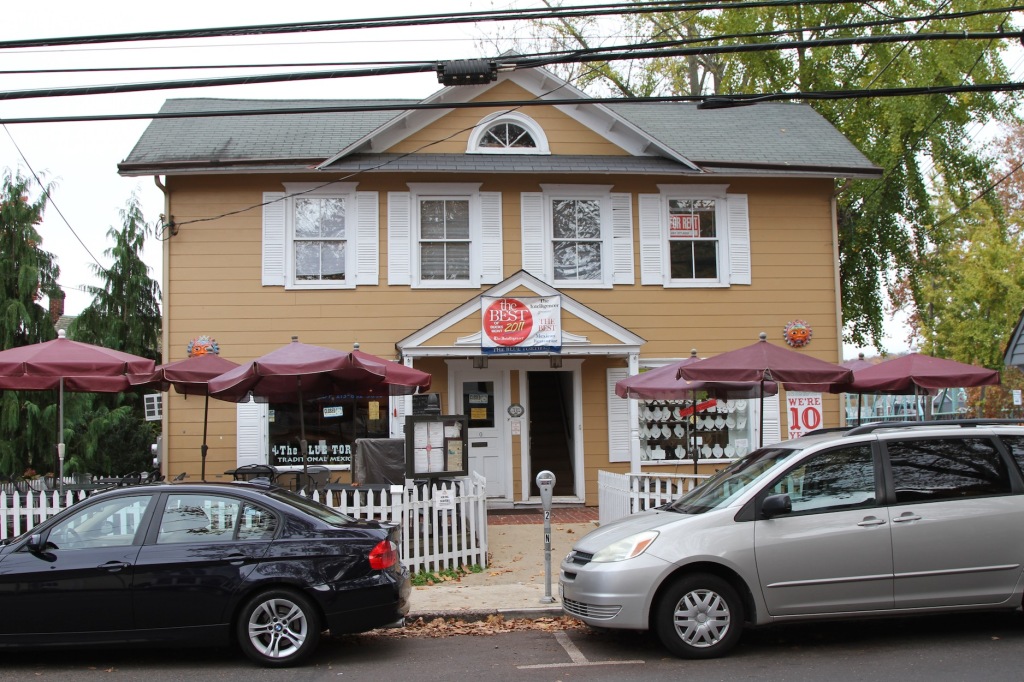 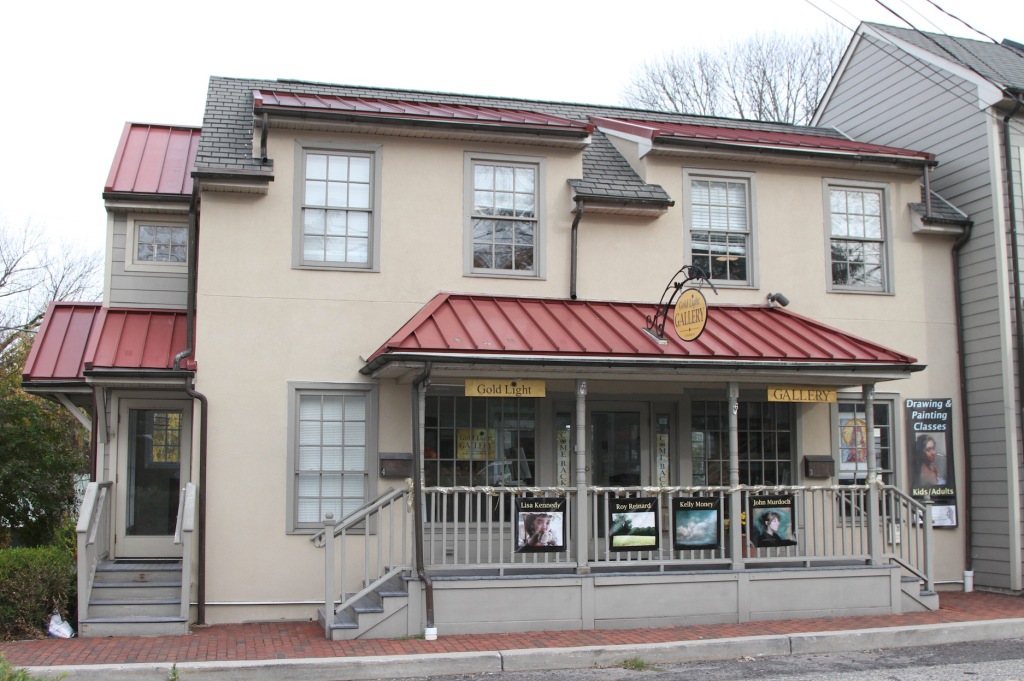 Just so we’re clear about the particulars, here are two examples of buildings that were absolutely normal at one time which are now completely illegal and unthinkable today. These are duplex homes that gradually shifted to include retail shops on the ground floor. Could these be built new in your neighborhood today? Noooooooo. If they burned down tomorrow could they be rebuilt right where they are? Probably not. These are grandfathered in, but they’re not reproducible. Full stop. Let it go. 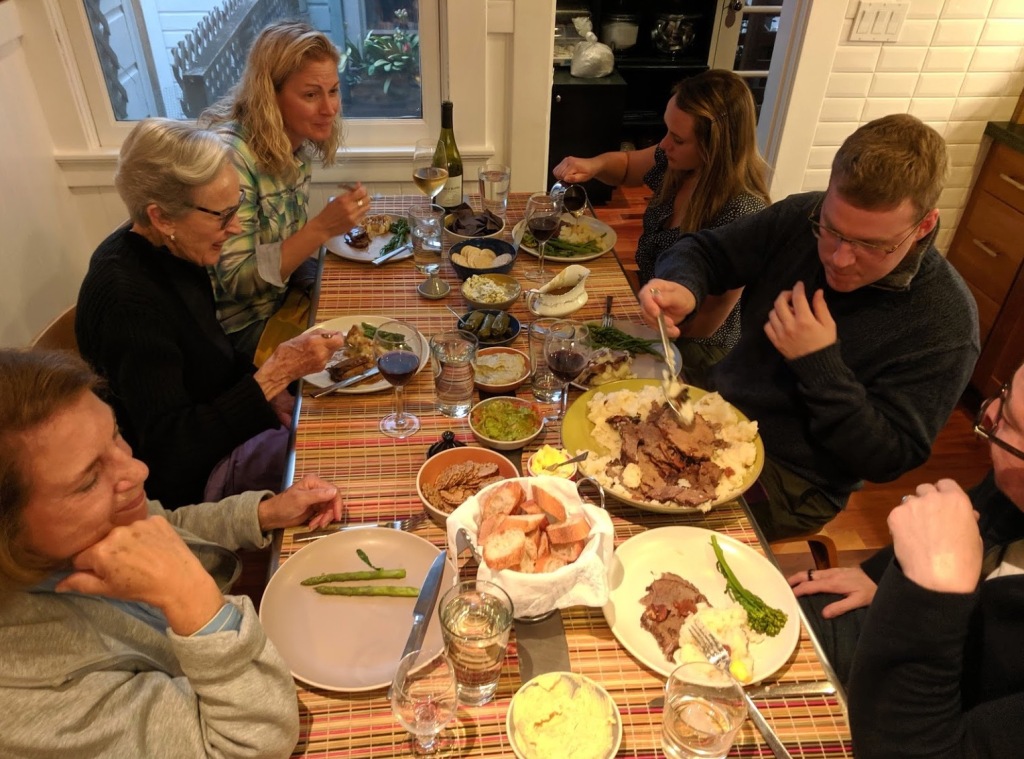 A little context is important here. Last night a group of regular suspects came over for dinner. One of the guys sells Tyvek House Wrap for a living. He walked me through the economics of his little sliver of the building industry. He has a monthly budget of $950,000. A “budget” in this case is what they used to call a “quota.” In other words he needs to sell about a million dollars worth of product each month to be successful at his job. He described a theoretical 4,000 square foot house which is relatively high end, although not extravagant by today’s standard. That’s an $800 sale. He can’t afford to waste his time on such tiny projects. Instead he focuses on corporate clients where 3,600 units are all going up in one master planned development. If he can sell to a few of those each month he can advance in his career.

The other guests around the table were visiting computer geeks in FinTech (financial technology.) They line up all the ones and zeros for the suits in New York, Singapore, and London from their digital outposts in places like Montana. Their jobs involve lubricating massive international capital flows through computer algorithms. It’s all about taking already insanely complex overly leveraged systems and extracting just a little bit more yield by adding additional layers of complexity. The scary part is that each person focuses on a wee bit of the process in their little corner, but no one fully understands the whole. Our dinner conversations encapsulated what IncDev is up against: economies of scale, international consolidation, vertical integration, and ever more creative financing.

Can ordinary people be taught how to navigate a dozen opaque unresponsive agencies and corporations in order to eventually build a mom and pop shop or a duplex? Maybe. Could all the rules be changed to make traditional incremental development legal again? In theory… sure. But the process is like eating Jell-O with chopsticks: slow, tedious, and thoroughly unsatisfying. Count me out. So what are the alternatives? 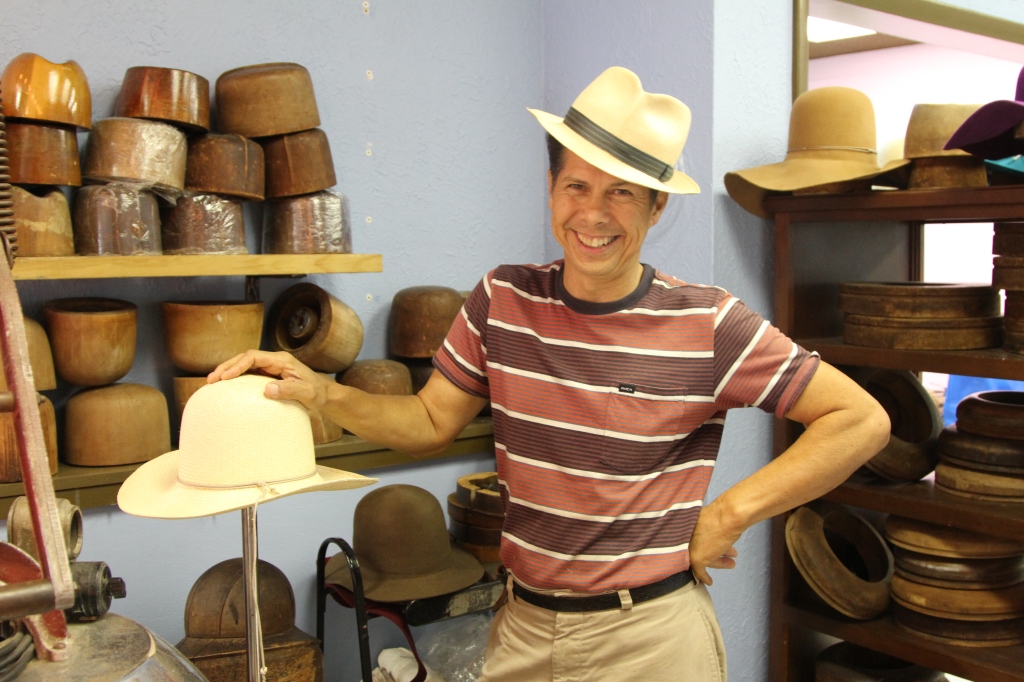 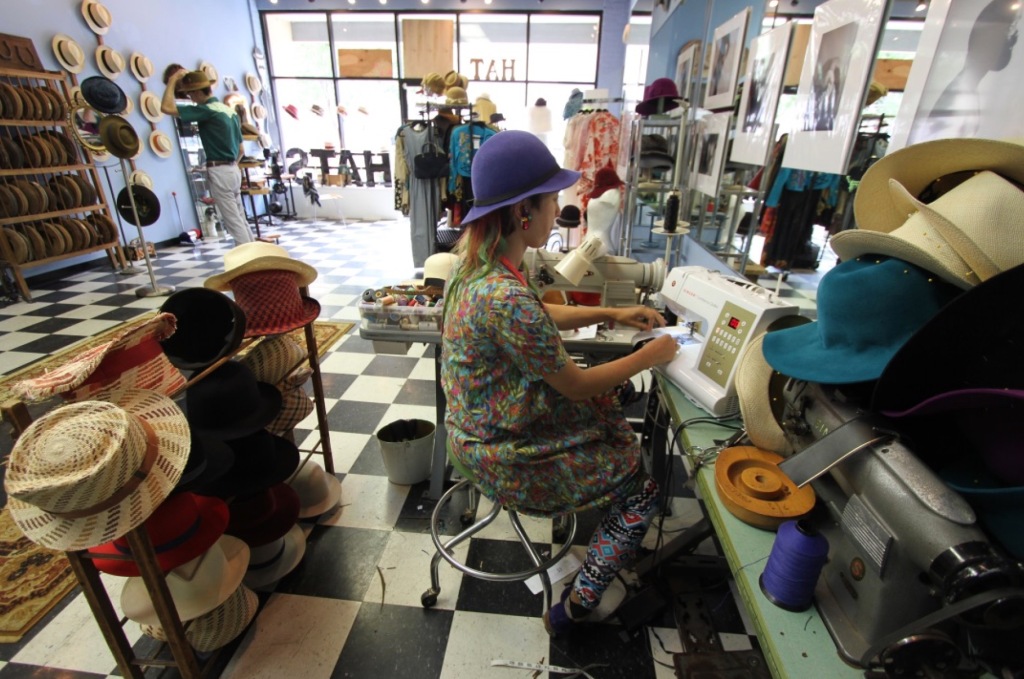 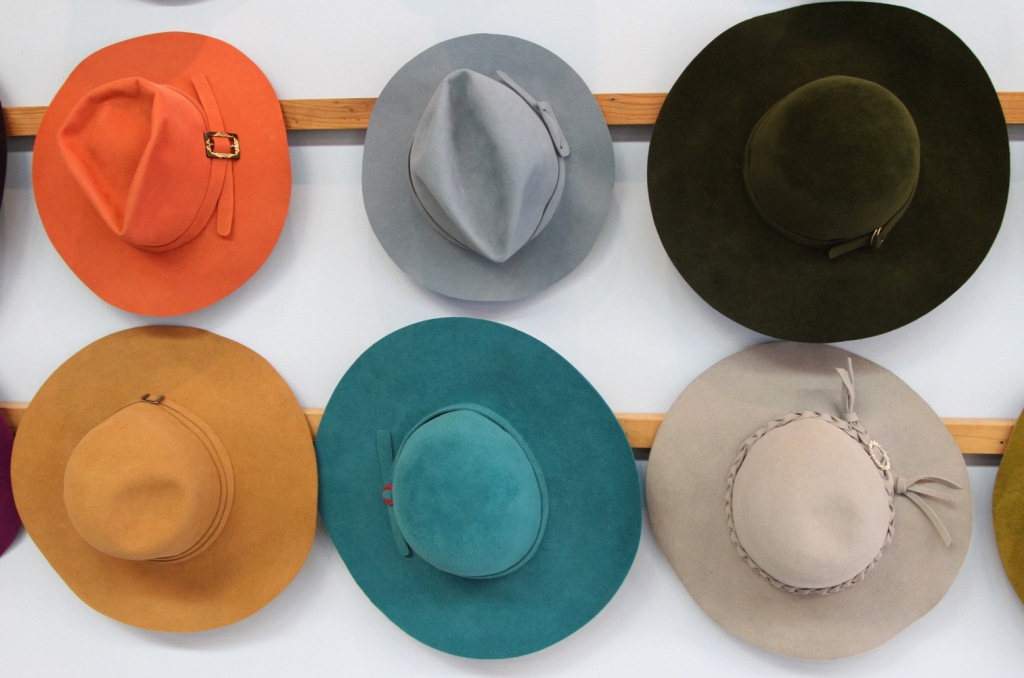 A few years ago I was in Louisville, Kentucky and stayed with friends-of-friends who had recently relocated there from San Francisco. They’re old school haberdashers with a line of custom made hats. It’s a niche market, but they’ve been doing well.

The family left San Francisco in search of affordable housing as they began to have children (see photos of a very pregnant Olivia) and they selected a simple 1950s tract home in an inner ring suburb close to downtown. This was a truly affordable part of Louisville that was in no way fashionable, but kept their commute down below ten minutes. There also happened to be a full kitchen and bath in the basement rumpus room as was common in homes of this vintage.

They rent the two attic level bedrooms to college students and the occasional Airbnber to cover most of their costs. Meanwhile they live predominantly in the rumpus room downstairs. It’s cool in the summer and the kids can run around and play without anyone worrying about the messiness or noise. It works for them on their budget and allows their attention to focus on building their business which now includes a tiki bar. Is this “transformational” or “catalytic” from a city planning perspective? No. Does it help this family get from Point A to Point B? Yes. Does it provide genuinely affordable rental accommodations? Yes. Did they have to beg for official permission? No.

Last year one of my chairs developed a crack and it needed to be repaired. I asked around and discovered a well respected old Russian guy who could do the job. I drove to his shop out in the suburbs and found he worked from his home. 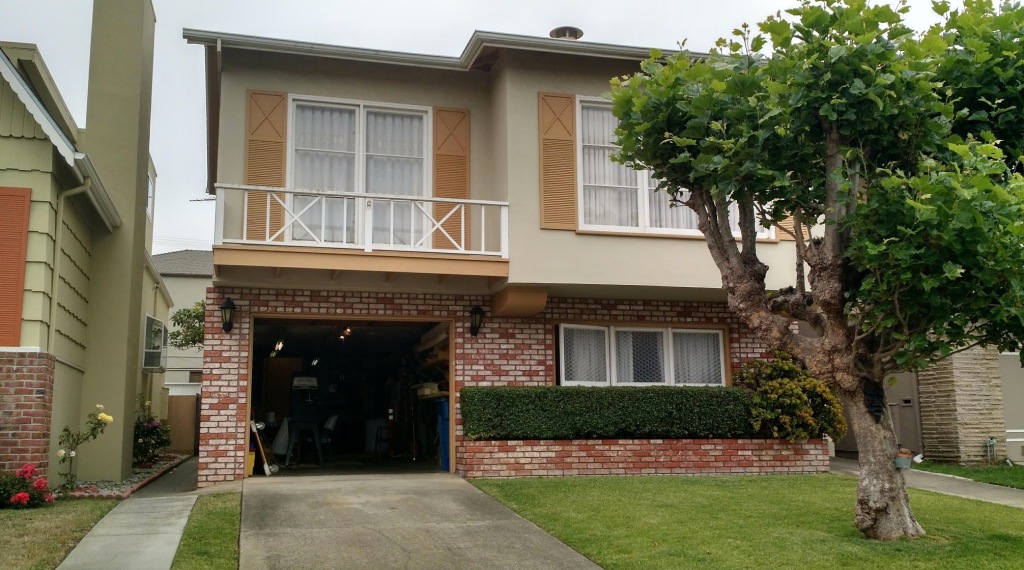 With the garage door closed his house looks exactly like all his respectable suburban neighbors. He was very clear in his instructions before I arrived to be quiet, park only in his driveway, and not disturb the residential tranquility. Technically this sort of thing is illegal due to zoning restrictions. If this subdivision had a home owners association I’m confident they would have shut him down long ago. But he’s been a good neighbor and the people around him have decided to cut him slack for many years. This is functionally a mixed use live/work building, but don’t dare say that to anyone at the city council. 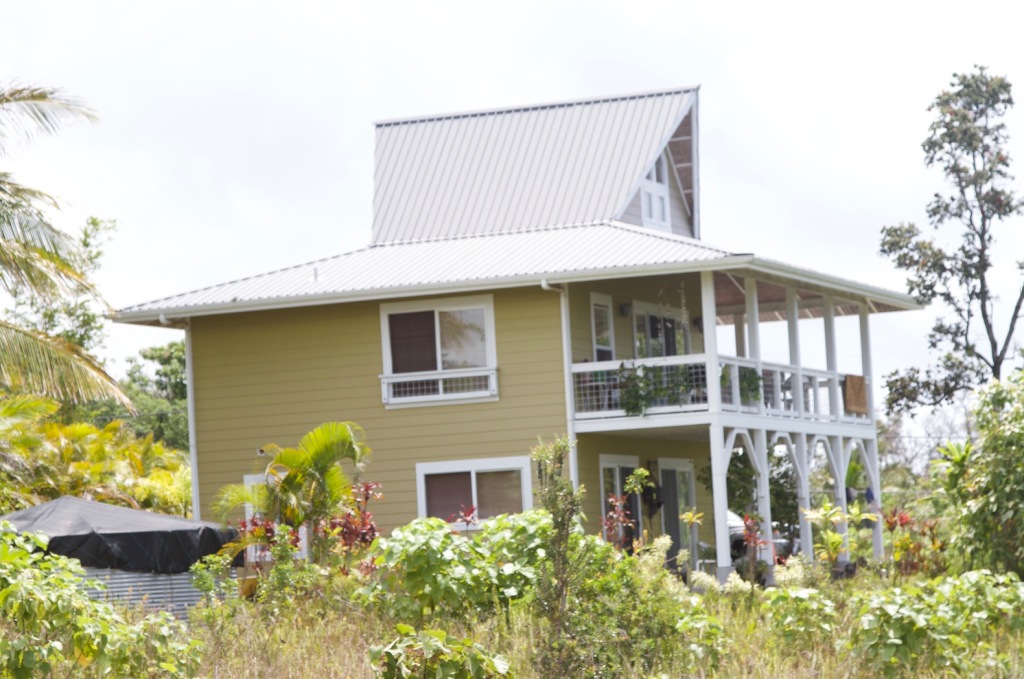 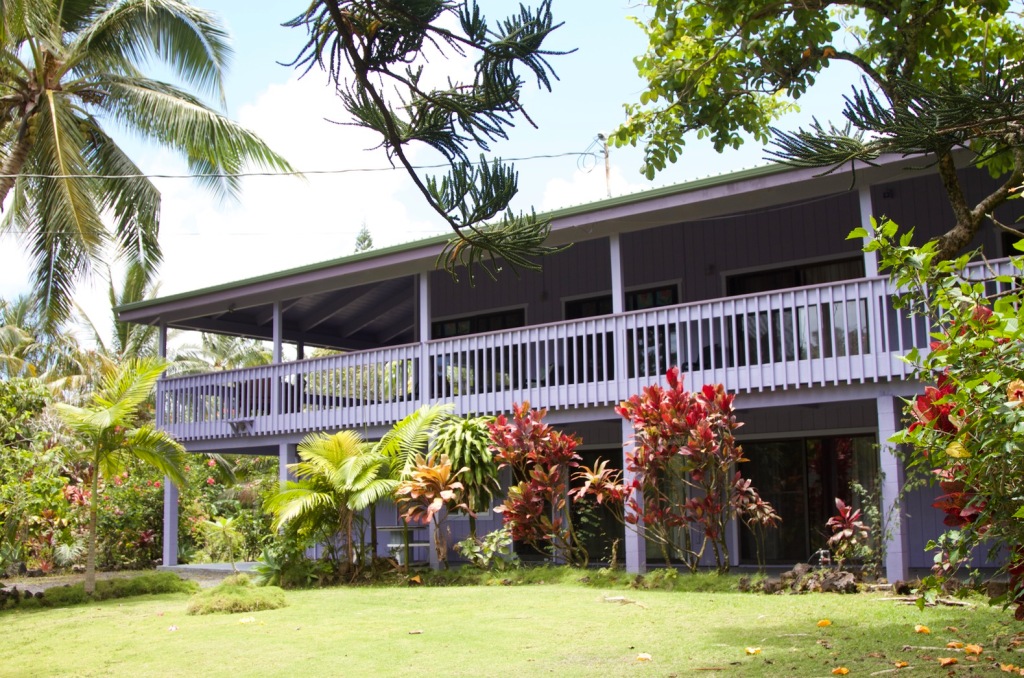 The homes you see here are all plain vanilla fully detached single family homes. Except they aren’t. Almost every one of them is a de facto duplex, triplex, or fourplex. But no one calls them that.

Here’s one example. This guy was taking early retirement and wanted supplemental rental income as he aged. He also knew plenty of people in the area who needed an affordable place to live, but there just weren’t that many options. So he built a modest 1,100 square foot two story cottage. The ground floor has two bedrooms each with a private bath and a glass door to the patio and garden. Add an outdoor barbecue, fridge, microwave, and some other plug in appliances and there’s a kitchenette or two. These are either two studio apartments – or if combined – a one bedroom apartment.

The second floor is a complete one bedroom apartment for the owner. The two floors are connected by an exterior stair and a raised deck above the lower patio. This is a stealth triplex. If the owner should ever develop ambulatory problems he can relocate to the downstairs and rent out the upper floor, or have live-in caregivers if need be. The same tactic could work in Calgary or Minneapolis if the patios and decks were replaced with glassed in sun rooms or entry foyers. And there’s no reason why this house couldn’t function just as well for a family with children minus the renters.

Here’s a standard suburban subdivision in Southern California. These homes were built forty or fifty years ago for what was then a broad expanding middle class which is currently sharply contracting. An ever increasing proportion of the population can’t afford to live here while many of the present owners find themselves house rich, but decidedly cash poor. Not everyone wants to take on room mates or have a stream of Airbnb strangers wandering in and out of their private space. And not every renter wants to live with their landlord hovering over them and micromanaging their every move. But there’s a compromise. 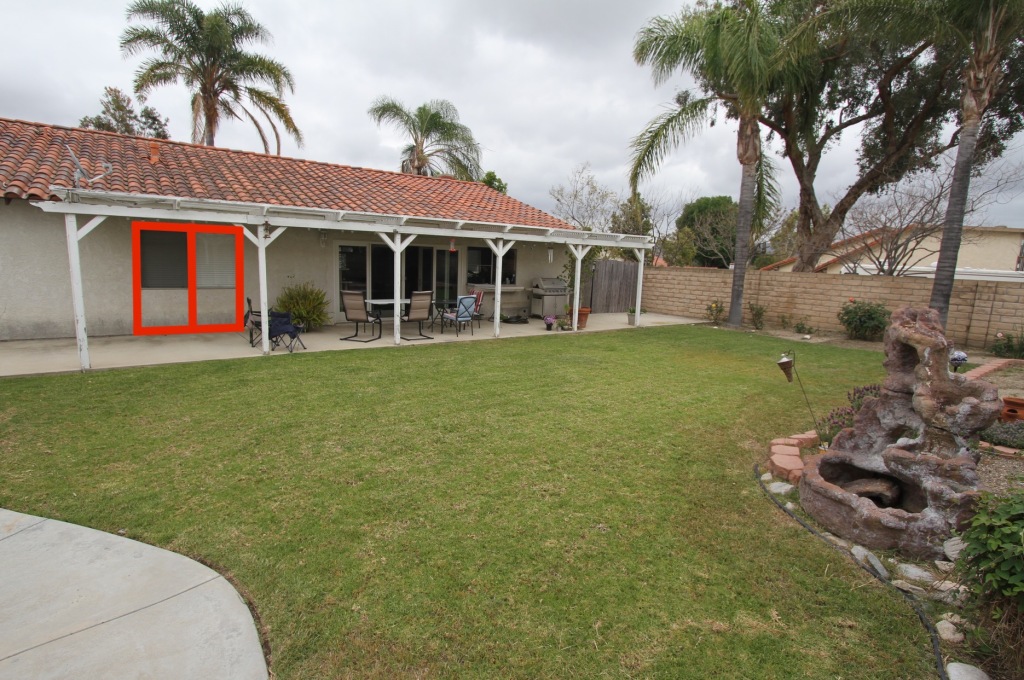 Replacing one of the master bedroom windows with a patio door is simple, relatively inexpensive, and completely legal. The vanity in the dressing area could be modified to become a “mini bar” (as far as city permits and inspections are concerned) and would be a functioning kitchenette minus a stove. For a lot of people this is sufficient. The interior door to the rest of the house could be fitted with a lock so long as multiple means of emergency fire egress were otherwise available. No laws would be broken, no one would have to take on any debt, and both the home owner and renter could have 90% of what they want. It’s a pragmatic compromise that works for a lot of people in a variety of situations. 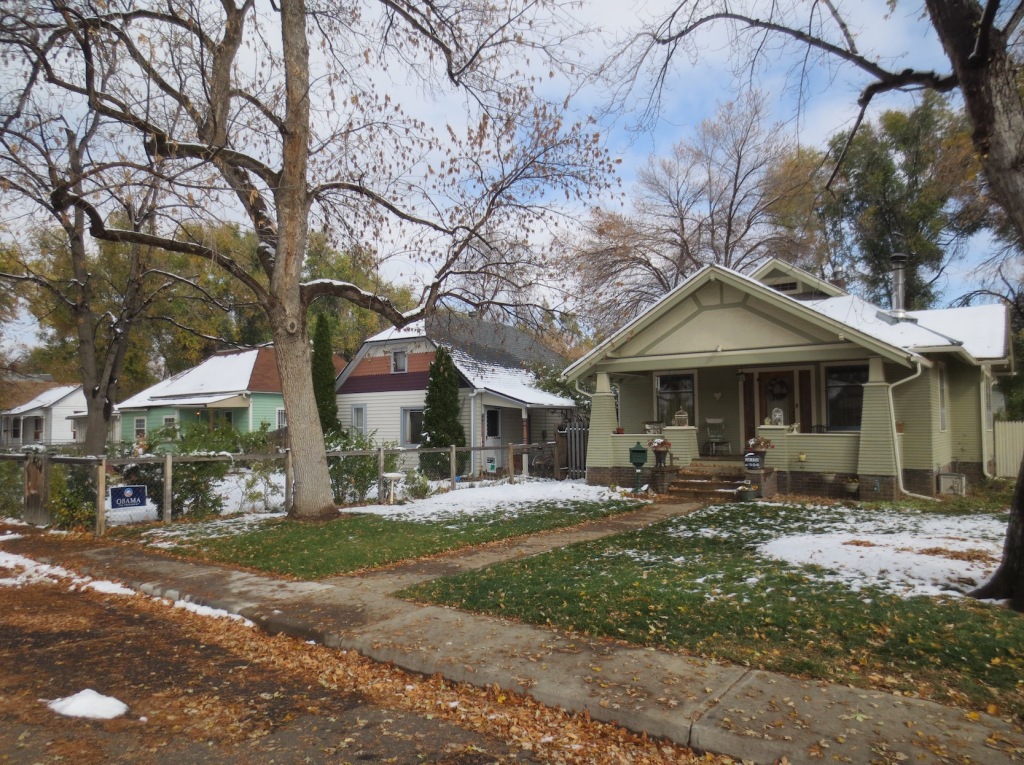 One of my favorite examples of successful small scale low cost incremental development is from a couple in Colorado. They had been working and saving for a home for a number of years during the economic boom of the early 2000s. The more they saved the higher home prices shot up. So they took a different approach. They built a Tiny House on wheels in mom and dad’s backyard. They were able to live there for free, find good paying jobs in the area, and continue to save money. When the crash of 2008 hit they just happened to have cash on hand and excellent credit just as housing prices tanked.

They bought a 600 square foot fixer upper close to downtown at the bottom of the market with a wee little mortgage and began improving it room by room as time and funds allowed. It’s a continuing work in progress. Fortunately they had the Tiny House parked in the back yard so they had a comfortable place to live while the dust was still flying during renovations to the main house. 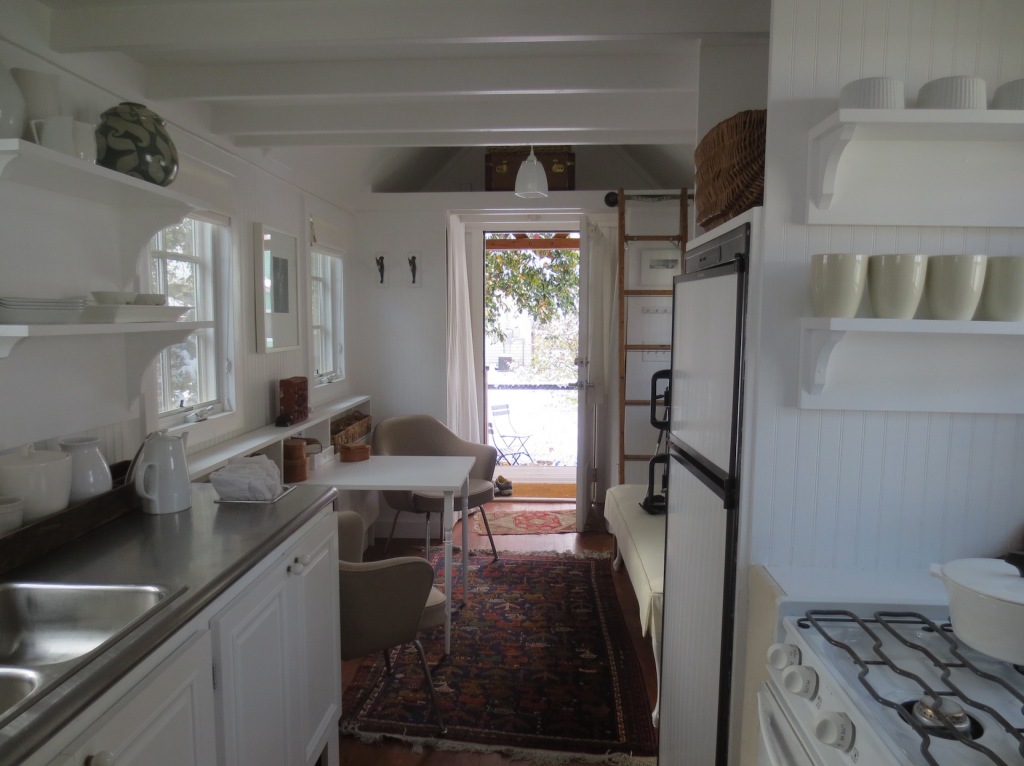 There are now times when friends, family, and co-workers need a temporary place to stay. It’s illegal to live permanently in Tiny Houses in most jurisdictions since they’re just a variation on RVs. So this couple avoids that constraint by only occupying the space for recreational purposes for limited amounts of time. It’s nice to have extra autonomous space for visitors for a week or two, especially when the primary house is so small. That’s perfectly legal. 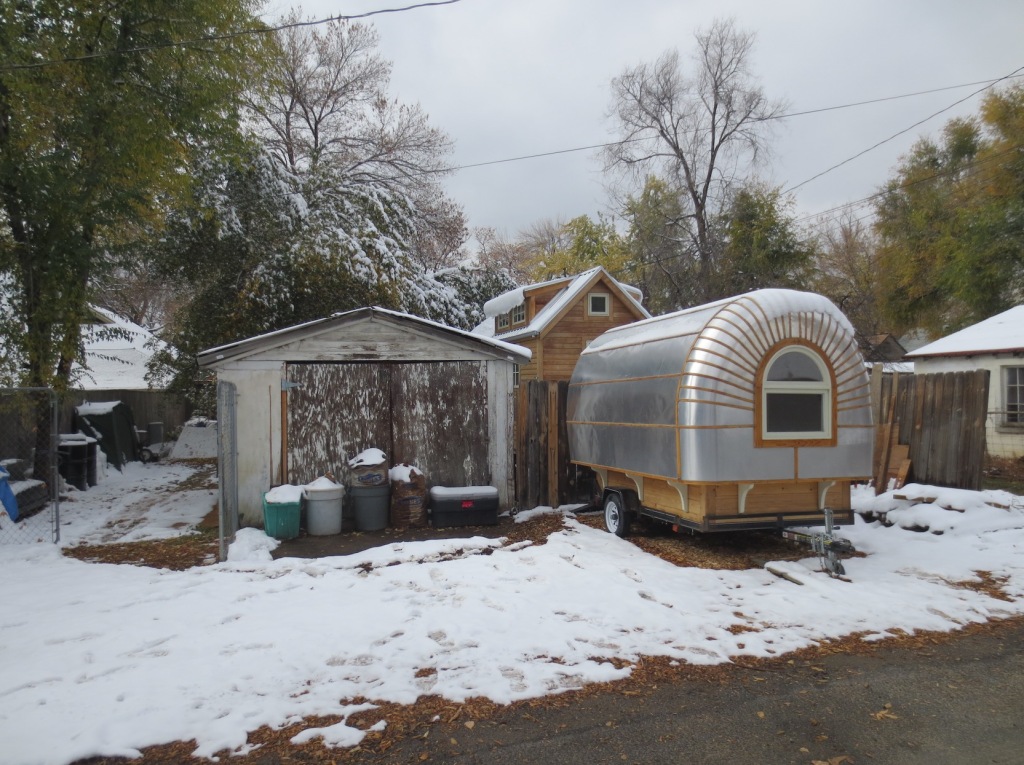 The old house is in a part of town with back alleys and detached garages. Theirs has seen better days, but they’re actively renovating it into a highly functional workshop for industrial design, carpentry, and metal work. So long as the existing structure isn’t altered too radically there’s a fair amount of regulatory wiggle room.

One of their other adaptive strategies was to build what they call the Protostoga. The husband works an hour away and didn’t love the daily commute. He persuaded his boss to let him work extra long hours four days a week and to enjoy three day weekends with his wife back home. He then arranged to camp discreetly in the back of his workplace in a suburban industrial park three nights each week so he only had to make the commute four times a month. It was a satisfactory set of compromises that worked well for everyone.

So here’s my message to the IncDev folks. By all means continue on with your good work trying to bring back the development pattern of a previous century. But let ordinary people with tight budgets and limited skills understand there are easier ways of achieving their personal goals. They may not necessarily contribute to changing the world, but living a better life might be the best they can do under our present circumstances. Stop trying to eat Jell-O with chopsticks, lower your lips to the plate, and suck it up instead.

37 thoughts on “Eating Jell-O With Chopsticks”