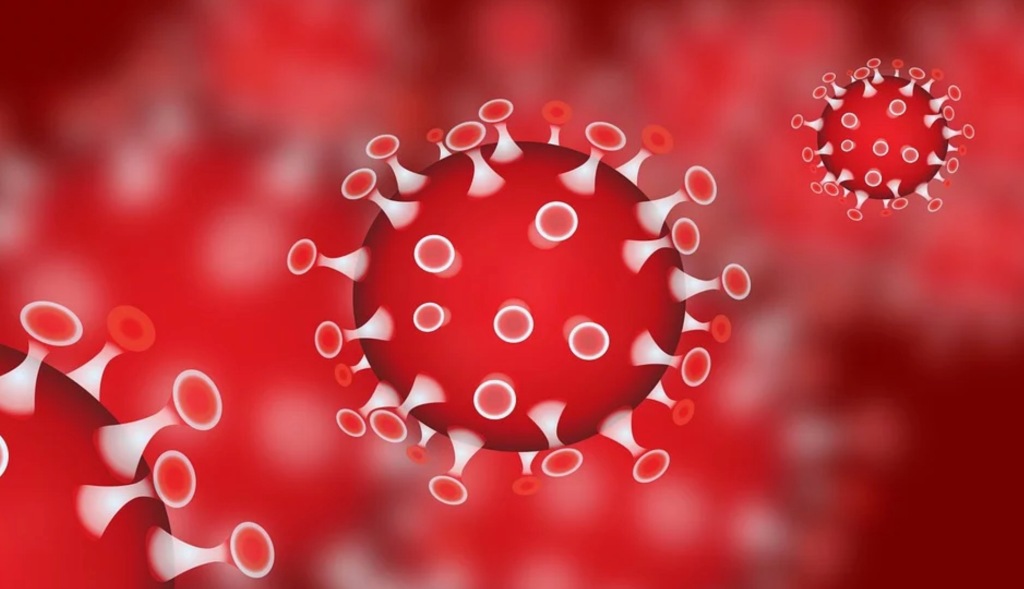 Concern over the Covid-19 virus has ramped up in earnest this week. There’s a camp that’s loudly proclaiming, “This is it! The pandemic that will cut down humanity has finally arrived!” There’s another camp that insists this is all much ado about nothing irrationally stirred up by social media and talking heads with their own agendas. I have no way of knowing which version is closer to the truth. But my gut tells me it’s somewhere in the middle.

There are 7.5B people in the world. We’re meat. Nature loves a good feedstock for her laboratory. The last hundred years have been a relatively benign period for human epidemics with improved public sanitation, vaccines, and effective antibiotics. We may be slowly reverting to the historic mean when it was normal for people to die in episodic waves of disease. Covid-19 could go exponential or fizzle out. Time will tell. For the moment I’ll offer these observations.

I’ve been getting a steady stream of calls, texts, and e-mails from folks who know I have prepper tendencies. They want to know what I’m doing to prepare for a possible pandemic. I tell them I’m looking over the books next to my bed. This might be a great opportunity to catch up on my reading. I’m the most relaxed person I know these days.

I already have a year’s worth of food on hand, lots of water in reserve, alternative ways of cooking, plenty of medical supplies including hospital gloves, N95 masks, proper respirators, and an extensive network of friends and neighbors to fall back on. And yes, lots of extra toilet paper. I also have funds set aside for a rainy day. Earthquakes, unemployment, illness… I’ve been reasonably well prepared for whatever comes down the road for a very long time. Does this make me immune from a deadly disease? No. But it makes me far less likely to freak out in a crisis. I’m also in a position to help others who are less prepared. If I had to “bug in” due to a mandatory quarantine I could stay home in comfort for the duration. If I became sick I could at least be ill in my own bed confident things were in order. Beyond that? Las manos de Dios. This is a great opportunity for me to do more of what I already do. I’m a modern day Johnny Appleseed, only I install emergency supplies at friends’ homes instead of planting apple trees. After a little earthquake tremor or worrisome news of some kind I make the rounds to whoever inquires and upgrade their reserves. I start with water and gently push them towards the other items on the list. Some friends finally let me help them with their long term food storage. I start with some pasta, rice, beans, and canned goods – or whatever fits their dietary parameters. The things that make people more resilient in a pandemic are the same things that will be useful in an earthquake, a bout of unemployment, or a power failure. My N95 masks were great when air quality deteriorated during recent forest fires. Why let a good crisis go to waste when it’s a teachable moment? 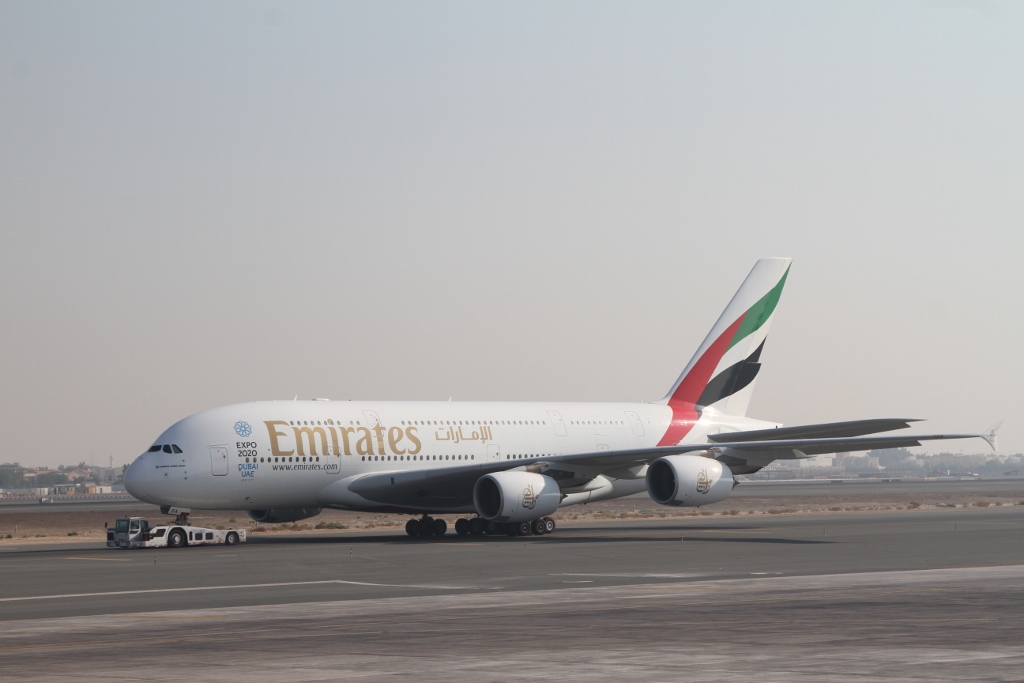 I also see the Covid-19 situation as an opportunity for discount travel. It may be unsafe and even socially irresponsible to get on a plane at the moment. Why risk catching a bad bug and then spreading it around? But long haul flights are being offered at deeply discounted rates since the airlines are in damage control mode. Several major companies are offering guarantees or full refunds for future cancellations or changes for the next twelve months. There’s a good chance that four or five months from now the health crisis may be over. If so I’d like to be holding seriously inexpensive tickets to visit friends in Australia, Europe, and Africa. If the situation later this year has worsened instead I haven’t lost much. I remember similar flight panics associated with SARS, MERS, and Ebola. They eventually fell out of the public consciousness. Here’s my primary concern associated with the mood of fear and contagion. The public panic might provide culturally acceptable cover for previously unacceptable institutional action. I noticed a lot of Covid-19 related talk concerns small scale farmers and mom and pop butchers in local markets. These are described as breeding grounds for novel infections and cross contamination between animals and humans. I’m sure there’s truth in that narrative. But the proposed alternative gives me equal cause for concern. Last year 25% of the world’s pig population died from a disease outbreak that spread from China. The Chinese government takes this sort of thing seriously since rising food prices or shortages historically go hand-in-hand with political unrest. When millions of housewives take to the streets with wooden spoons even a hardline government has a real problem.

The official plan is to eliminate millions of small farms and markets that don’t live up to strict health standards. Pork production will then be consolidated into massive contained facilities with quarantines and continuous lab testing. This is in keeping with the accelerating global trend of amalgamated industrial agriculture, economies of scale, vertical integration, just-in-time international supply chains, low wage workers, disregard for long term consequences, and the overuse of antibiotics. These factory farms already have a spotty reputation for food safety and public health. And the geographic, economic, and political concentration of industrial meat production makes it extremely difficult for individuals to do much in response. 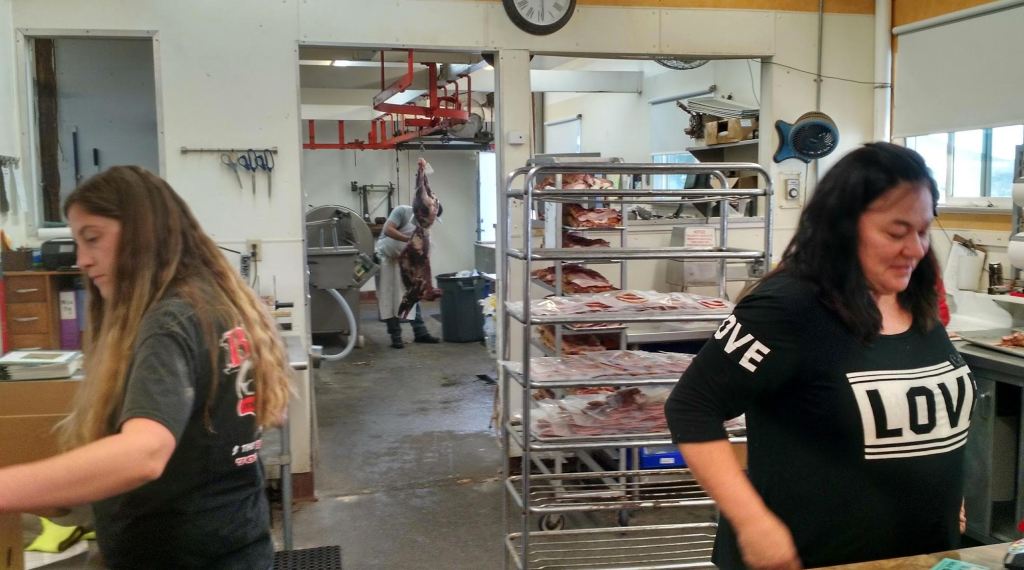 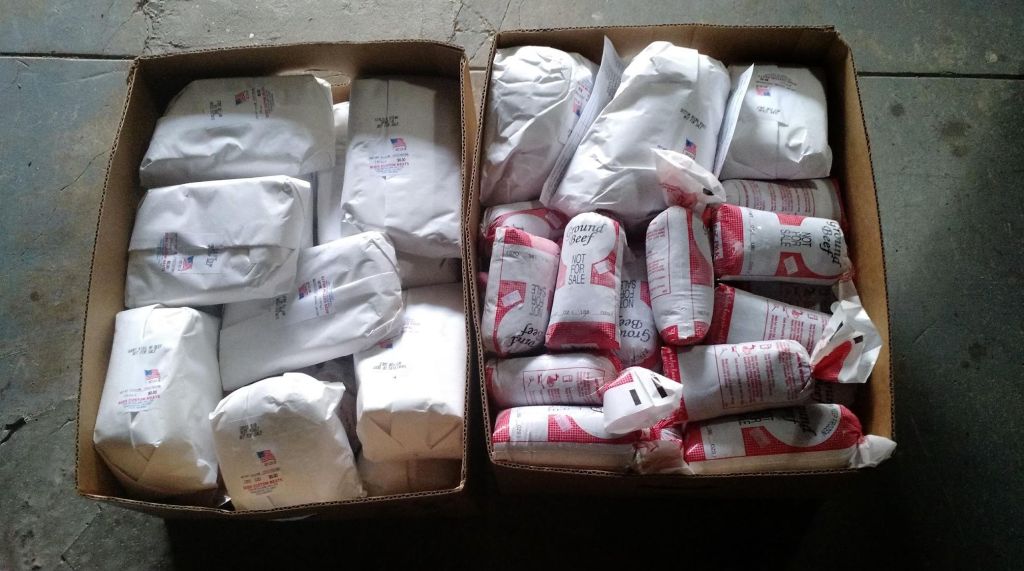 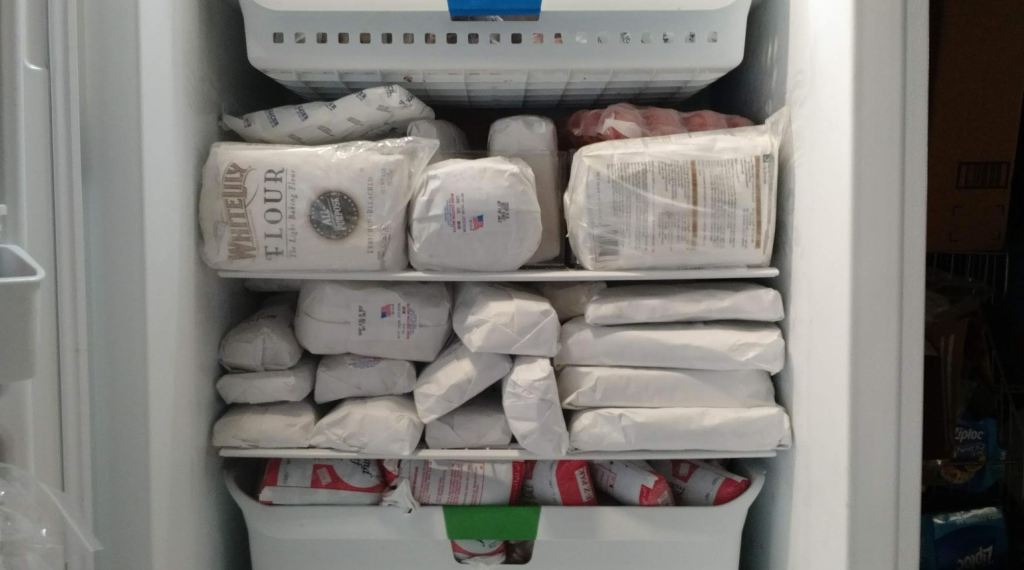 We could easily see laws forbidding backyard poultry or smallholdings of livestock. That would create an absolute dependence on a handful of powerful suppliers with every institutional incentive to improve “shareholder value” or hit government targets for intensive production. I don’t know if I like that more or less than sketchy local butcher shops… I much prefer the local farmers and shops that provide me with my meat. And I’d like the option to keep some chickens, rabbits, and goats in the back garden. The ability to feed yourself may eventually become both illegal and culturally unacceptable. That’s a real problem in my opinion.

I was in Orange County down in Southern California last year and had a long chat over lunch with a respected public official and business leader. I pointed out the obvious. There are large numbers of people living rough outside on the pavement, under bridges, along the river, and in public plazas. Since there is no “solution” for housing them I asked if the authorities could at least provide porta-potties and wash stations with clean water. This seems like a public health disaster waiting to happen. The response was measured and well rehearsed. No. Providing sanitary facilities would only encourage more homeless to congregate. It would also send the wrong message. It would be an admission that we now have permanent favelas in America. And critics would assert the authorities are assisting and legitimizing these camps against the wishes of property owners and businesses. I took that logic in and mulled it over for a while. The only acceptable action is to make the homeless go away somehow never to return. But sweeping them up and disposing of them is difficult, expensive, and fraught with legal roadblocks. Unless we had the cover of a pandemic… I can list a few hundred dead Kmarts, Sears, JCPenny, and Macy’s stores that would make excellent holding facilities for the people society doesn’t want to think about. No windows. Very few doors. Fireproof. Easy to guard. These mothballed shopping malls already have bathrooms and food courts. Fill them with cots, drop off some rations from time to time, and don’t fret too much over the particulars. Whatever may or may not happen inside during emergency health orders would be of little interest to a greatly relieved public happy to finally be rid of them. What could go wrong? 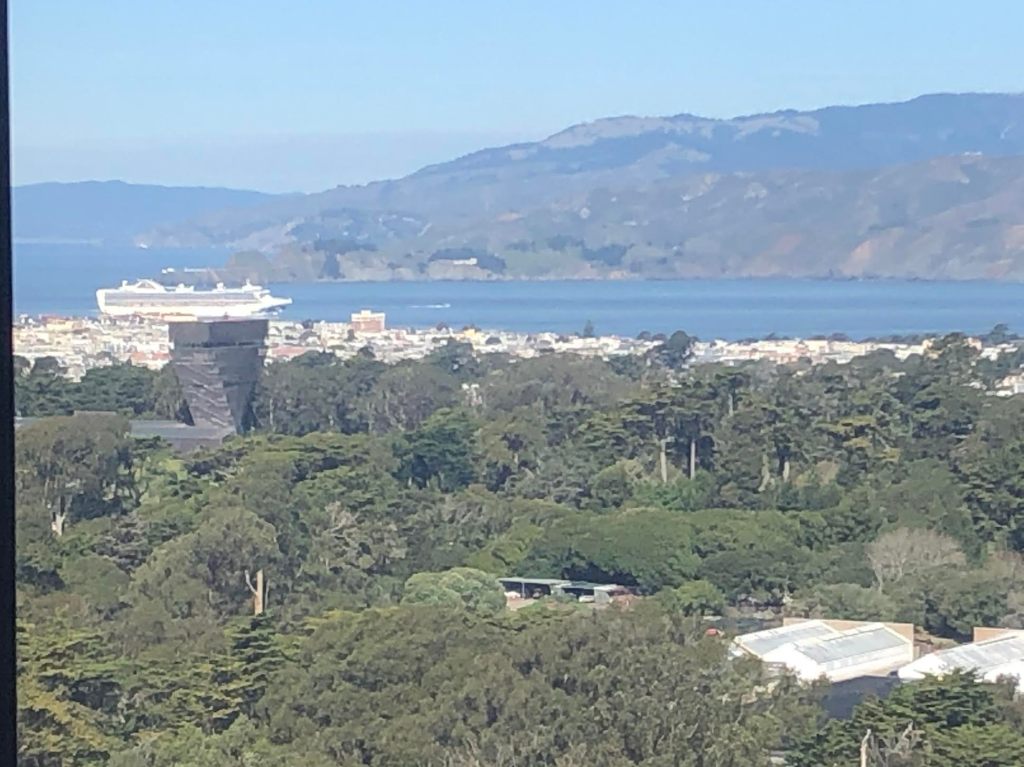 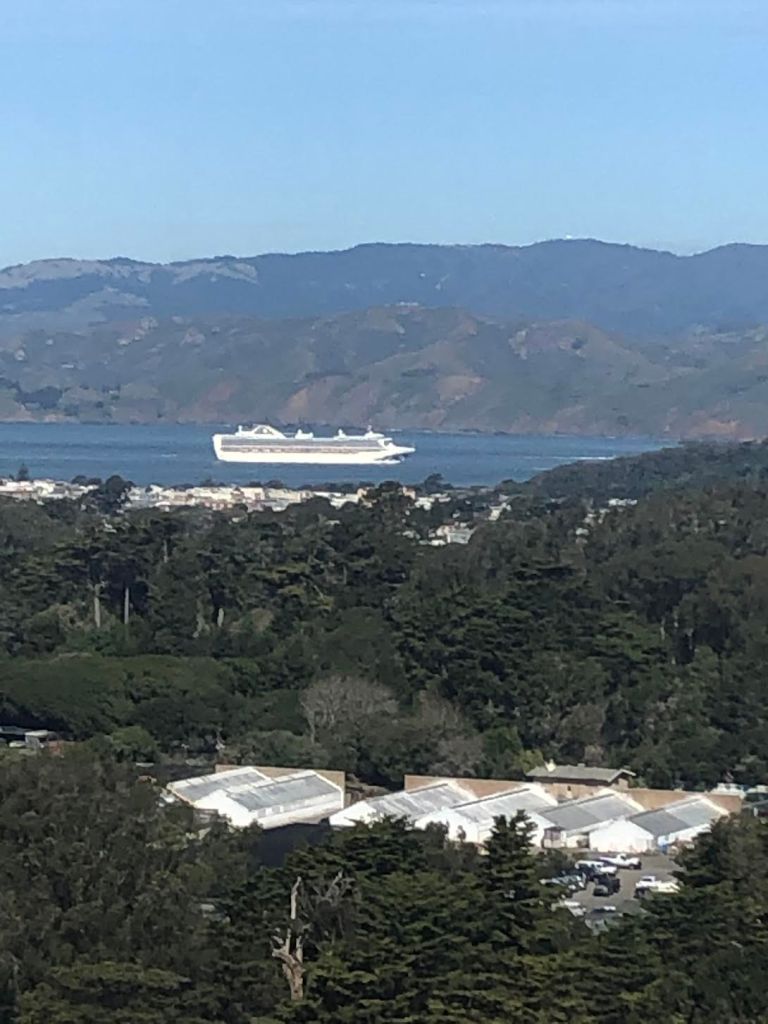 This afternoon the so called Plague Ship Grand Princess rolled in to San Francisco Bay. Friends sent photos from their downtown office windows as the vessel made its way to the Port of Oakland. One coworker has elderly parents onboard. Passengers and crew will be the special guests of the health authorities for the next two weeks.

Even on a good day cruise ships have a spotty reputation for food safety and public health. Industry consolidation, economies of scale, vertical integration, just-in-time international supply chains, low wage workers… With a few thousand people packed into a giant sealed floating hotel these ships are the embodiment of the fragile global economy. This is the tourist version of industrial meat production.

I have friends who work at the big hospitals in the city and they’ve already set up “training tents” in case a trickle becomes a flood. Many of the complaints from the folks trapped on the Grand Princess had to do with being cooped up in their cabins and the poor quality – or outright absence – of food. Mind you, these are mostly older and more prosperous people with fairly high expectations for their cruise experience. The danger here is that as society becomes overwhelmed we start to do things we wouldn’t ordinarily even think about. Might otherwise respectable people find themselves in dead malls under guard and out of sight with expedient poorly funded overseers? Welcome to what might become the new normal.

Here’s one last thought. My personal relationship to plagues is colored by my early life experience. I was precocious and came of age during the early 1980s. Highly infectious disease? Check. 100% fatality rate? Check. No cure? Check. Lackluster official response? Check. There’s a huge demographic hole in my life. So many people I knew were lost. Meanwhile the general public shrugged and went tisk-tisk. Looking back I should be dead. Yet here I am. Dumb luck. All the fuss about Covid-19 is underwhelming to me. I’ve seen worse plagues. Your weltschmerz gives me schadenfreude.

47 thoughts on “Your Weltschmerz Gives Me Schadenfreude”